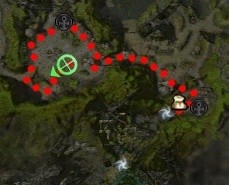 We've finally backed the Afflicted into a corner. This is it. The other members of the Ministry who were engaged in Drazach Thicket have joined us, and we're going to need their support. Do you remember that abomination we fought at Pongmei Valley? It's just like that...only this time it isn't alone. There's several of them. Well, that's the way of the world, isn't it? Nothing is ever easy; nothing worth fighting for, anyway. But think of it: the land is finally purged, and Reiko's vision has been brought to fruition. The fighting can end, and the reconstruction can begin.
The ancestors have looked upon us favorably thus far. Will you join us at Morostav Trail to be part of our greatest victory?

Accept: This is the last one. Let's make it momentous!
Reject: No, no. No more Afflicted.
When asked about quest: Travel to Morostav Trail. I and other members of the Ministry of Purity will meet you there.

Intermediate Dialogue 1 (as you approach the objective)

Initiate Zei Ri: The world is waking up from your nightmare. Come and meet your end!

Intermediate Dialogue 2 (after completing the quest)

Initiate Zei Ri: I can't believe it. I have spent over a year of my life working towards this day, and now that it's here...I don't know how to feel.
Initiate Zei Ri: I only hope that my father is at rest now and that I have done his memory proud.
<player character>: I'm certain that he is. What will you do next?
Initiate Zei Ri: I think I'd like to visit Tahnnakai Temple before I return home. I have...some respects to pay to the departed. I hope that our paths will cross again.

Well done! There's no way that we could have come this far without your aid. You should speak with Xan Hei in Xaquang Skyway. I am certain that he will wish to personally reward you for your efforts, now that our job is done. As for me, I intend to go home and rest. But only a brief respite; there's still so much to do!

A relatively short quest, it features no less than 8 boss Afflicted, one for each profession. The bosses you will face in this quest:

Before you start, make sure the shrine is activated, if you are of Luxon affiliation. Take great care in luring the boss groups, as aggroing more than one can easily cause a party wipe. You will find the 8 bosses roughly in a circle. The Ministry of Purity provides some help in the form of several soldiers, but these do not become part of your party and do not resurrect if killed, unlike Initiate Zei Ri.