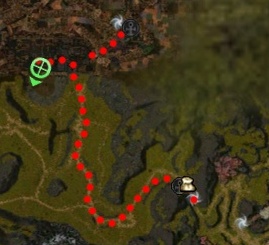 Our efforts have met with great success; we know of only one group of Afflicted remaining in the vicinity of Kaineng. It was last seen in Pongmei Valley, and apparently there's something different about this one. One of the Afflicted was described as impossible massive. Whether it's because the person was huge was [sic] prior to being consumed or it's a result of the evil the creature has done since, I don't know. I do know that it's a thread, and it's our charge to deal with it. That's all the reason I need. Will you join me?

Accept: "The greater the foe, the greater the glory."
Reject: "I'm not interested unless the compensation is impossibly massive."
When asked about quest: "There's an impossible massive Afflicted waiting for us in Pongmei Valley. We shouldn't keep it waiting."

Initiate Zei Ri: That... is a very large Afflicted.
[Player Name]: If it makes you feel any better, I've fought countless things far, far larger than this.

Initiate Zei Ri: This world was not meant for one such as you! May your kind never set foot on these grounds again.

Ministry Captain: Well done, Initiate! I wish I could grant you a reprieve, but we've just received urgent news from Shing Jea Island.
Ministry Captain: Several people were lost within the abandoned estate that belongs to Minister Cho. We assume they encountered the plague that has remained there.
Ministry Captain: But those people may not be a lost cause. We need to know what has happened, but most of our forces are engaged in Kinya Province. The fighting has been fierce, and we just don't have the numbers to split our efforts yet.
Initiate Zei Ri: I understand. I will make preparations to leave at once.

That handles that. Thanks to you, I've met my responsibility of helping to clear the city. It looks like the Ministry is going to need us on Shing Jea island next. It's beautiful there this time of year. Do you like to travel? Never mind that, that's probably a superfluous question for someone like you. Here, take this.

Leaving from Boreas Seabed you should be able to run to the mob without having to fight any other groups. The Monstrous Afflicted Warrior can deal large amounts of damage with its hammer as well as heal itself relatively well.