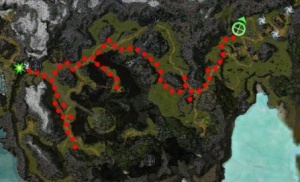 Our work here at Shing Jea is nearly done. There's just one remaining source of corruption that mars its perfection. Zunraa, the guardian deity of Zen Daijun, has succumbed to the lingering presence of the Afflicted. As long as the guardian remains in that state, we will never truly be able to cleanse those lands. We have been tasked to travel to Zen Daijun and to call forth the afflicted aspects of Zunraa by summoning them from the shrines. The ancestor spirits saw fit to spare the life of Ashu; I am certain that they will do the same for Zunraa.
You have proven a useful ally so far, and it would expedite our task if you would join us again.

Accept: We need to restore balance to these lands.
Reject: Corrupted deities might prove contagious.
When asked about quest: Our last dispatch on Shing Jea Island is at Zen Daijun. Meet me there.

Initiate Tsuriai: Return as a guardian once again and watch over these lands.

Initiate Tsuriai: I pray this eases the suffering and soothes the hurt.

Initiate Tsuriai: May you find peace once more.

Initiate Tsuriai: Be at rest, now.

You have done well in aiding the people of Cantha and upholding the values of the Ministry of Purity. See that you continue to do so. You may wish to check in with Initiate Zei Ri once more, to see how the battle has been progressing on the mainland.

The groups of Afflicted in this mission range from four to six, and pack a significant punch. Make sure you have appropriate healing and or protection. Take care before running up to a shrine to Zunraa, as there are usually several mobile groups patrolling around the shrine, and you might find yourself overpowered if you do not clear these out before hand.

You can also consider pulling the Afflicted Zunraa's away from the shrines, as they don't appear to be linked to the groups of Afflicted guarding the shrines.