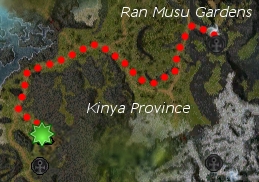 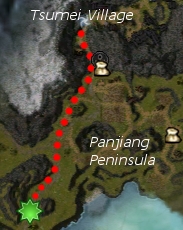 "Much as the Ranger safeguards Nature's balance, the Assassin's purpose is to right social imbalance. But you have achieved the opposite. Relations between humans and the Tengu are strained in the best circumstances, but we at the monastery make it a point to treat them with honor and respect"

"The village of Aerie is quite angry, and you and Panaku are to blame. This this [sic] is not the first time Panaku has enticed a student to do his dirty work, so Master Togo and I have agreed not to expel you, but you will be required to pay a visit to Aerie and convey our respects and apologies."

"Present this carved buckeye to Soar Honorclaw, your victims daughter. It looks like any Tengu to me, but Talon assures me it is the very likeness of Swift Honorclaw, and that it is the appropriate offering to a grieving Tengu Family."

"You are from the monastery. I have expected you daily."

"Do not look for a welcome; you slew my father unjustly, and there are many here who wish you harm, but you are under my protection for the moment."

"Just so you understand, my father earned his death when he offended Dao Weng, a dishonest merchant who refused to pay a fair price for our grain. An argument with a Tengu in front of his associates was enough to injure the man's honor, so Dao Weng hired an Assassin to kill him."

"My thanks to the monastery for their offering, but I have one requirement before I consider matter repaired between Aerie and the monastery. I have arranged a meeting with Dao Weng, and I want you to appear in my stead and kill him."

"Where is Soar Honorclaw? Who are you?"

"Guards! Kill this Assassin immediately! I will await you... somewhere else."

"With Dao Weng's death, my father's spirit can finally fly away into the Sky Above the Sky. You may return to Master Togo and tell him that the score is settled. He is one of the few humans in this land who deals with the Tengu honorably, and that is not something I take lightly."

"Society's balance teeters on a razor's edge. Your judgment must not. But you have done well, and if you keep your wits about you, you may yet make a great Assassin. Now, seek out Master Togo in Linnok Courtyard. All students who complete the advanced courses are required to speak with him."

This is a fairly straightforward quest. Exit from the west portal from Shing Jea Monastery and go through Sunqua Vale to get to Kinya Province. However, an alternative to this is to exit to the Kinya Province portal from Ran Musu Gardens; this shortens traveling time to Aerie. Talk to Soar Honorclaw once you get there to deliver the Carved Buckeye. She will then tell you to go kill Dao Weng before she'll consider the score even between Aerie and the Monastery.
You will find Dao Weng in Panjiang Peninsula. You can either go southward to enter Panjiang Peninsula or map back to Tsumei Village and go from there. When you reach Dao Weng, he won't automatically be an enemy, though as you approach him he will. He'll have some Crimson Skull Raiders with him; kill them along with Dao Weng, then return to Aerie. If you are returning using the portal that goes into Kinya Province from Panjiang Peninsula, consider taking the quest The Agriculturist from Tahbo Paa. The only thing you have to do is escort him to Aerie, which is where you're going anyway.

Instead of wasting time delivering the eye first, you can exit Tsumei Village and kill Dao Weng first. You can then go to Soar Honorclaw, deliver the eye, and finish the quest at the same time.
If this shortcut is taken the map marker for Dao Weng will not be showing. He can be found in the area directly below the letters "ula" of the word Peninsula on the main map.