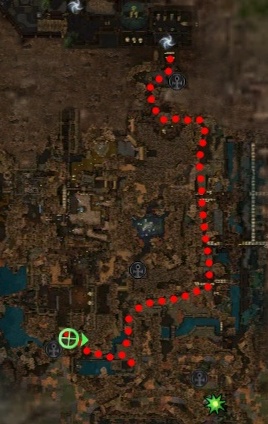 This is it. The last sighting of Afflicted within Kaineng City. Until now, you have helped me fight, while the Ministry has continued the battle on other fronts. It seems that the afflicted aren't returning. So tell me friend, now does it feel? Knowing that you're making a difference in the world? Well, I guess that's a moot question to be asking you. You must be used to that sort of thing by now!

The final Afflicted were seen in Sunjiang District. Will you help me send those unfortunate souls to the Mists?

Accept: "We've come this far. Let's see it through."
Reject: "Actually, this is far enough."
When asked about quest: "Kaineng City is almost free. The only place left for us is Sunjiang District. I'll meet you there."

Intermediate dialogue After the first group of Afflicted

Initiate Zei Ri: "So many lives were lost to the Afflicted. Yet, no matter how large the number, it doesn't have as much impact on me as an individual loss."

After the second group of Afflicted

Initiate Zei Ri: "My father was one of the casualties. There was a time, as a younger man, when I wished nothing more than for him to be gone. Looking back on that now..."
Initiate Zei Ri: "He was a strict man, my father. He was impossibly hard on me at times. I always thought he resented me. Too late, I came to understand that was just his way of showing he cared for me."

After the third group of Afflicted

Initiate Zei Ri: "Every time I face the Afflicted, some part of me fears that my father might have become one of these abominations. How would I feel if I knew, I wonder?"
[Player]: "How it ends is the important part. You would know his soul is at rest."
Initiate Zei Ri: "That is what we've been working towards. Let's finish this."

After the final group of Afflicted

Initiate Zei Ri: "It's hard to believe that they're finally gone from Kaineng City. I wonder if we'll receive a commendation from Minister Reiko."
[Player]: "Is that who's in charge of the Ministry of Purity?"
Initiate Zei Ri: "Ah, that's right. You haven't had the chance to meet her yet, but she is indeed in charge. I can't wait to report the good news. Let's get going!"

"We've done it! It has been a hard-fought battle, but the city is safe now. However, our work isn't done yet: some afflicted remain on the outskirts of the city, and there is rebuilding to be done. We must see to the injured and to the allies who fell along the way. But we shouldn't let those thoughts taint this moment. This is an important step forward. Take this. I hope that it serves as some compensation to you."

The quest is fairly straightforward. Leave from Zin Ku Corridor and just follow the quest markers. The groups are located in the southeastern corner of the area.