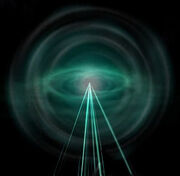 Communing's casting symbol
This symbol usually appears above the caster while casting a Communing spell.
(For details see: Skill animation)

The Communing attribute reflects a Ritualist's skill when creating spirits. This is not a primary attribute and may be used by secondary ritualists.

Communing is a requirement for meeting a wand's or staff's max damage.

The Communing attribute increases the duration and effectiveness of a created ritualist spirit through communing skills.