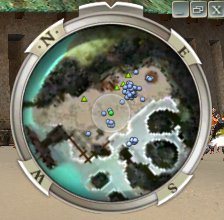 The Compass in towns outposts or PVP areas 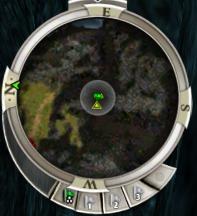 The Compass in explorable areas

The compass (aka mini map or radar) helps with navigation of one's surroundings as well as shows the locations of targets within the area. Each color dot/triangle represents a different type of target.

When in a zone or mission, the party leader will get a bar added on the bottom of the compass allowing him/her to position henchmen without moving their own character. Players with heroes are also able to remotely control them, both as a group and individually.

The Silver Circle in the center of the mini map represents the player's Danger Zone. If the enemy enters this circle, they will gain aggro and attack. Use this circle wisely to avoid unnecessary fights. Mastery of this principle is vital to aspiring runners.

The compass also shows the quest marker of an active quest. If it is outside of the compass, its direction (in a straight line) is marked by a green arrowhead at the border of the compass.

Interacting with the compass[edit | edit source]

Note that in some missions the game will automatically ping the locations of important places, items or characters at a set time or interval to ensure that players do not lose track of where those things are. Pings created by players are red, while the automated pings that appear during missions and quests are yellow or blue.

In the Nightfall update, Hero command buttons were added under the compass, allowing players to order specific Heroes to certain locations on the map. The green flag icon was also added and acts as a "rally" command, affecting all NPC members of the party, including Henchmen and Heroes. The party leader can use the flag to move Henchmen, allowing for more effective coordination. Note that only the leader can control Henchmen; party members will neither be able to control them nor see the flag location. Likewise, Heroes can only be flagged and the flag location seen by the player who owns the Hero.