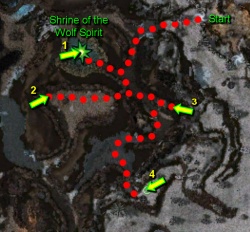 Automatically added to quest log after completing Tracking the Nornbear
After first completion, can be obtained from:

Follow the quest arrow, battling your way through mandragors and jotun. Once you get to the shrine area, there will be several wolves who will turn from ally to foe and start attacking the jotun. After all foes in the area are cleared out, you can click on the Shrine of the Wolf Spirit and equip the Volfen Blessing skill on your skill bar.

If you activate Volfen Blessing and use Volfen Bloodlust. it will make a quest marker appear, indicating Svanir's location. You will have to track him down three times. In the first two fights, he will disappear after taking some damage. The third time, you will fight him to the death. After the cutscene you will be returned to Sifhalla.

The Nornbear will appear when you reach each location regardless of whether you are actually using Volfen Bloodlust or not, so as long as you know where he will appear (locations 2 through 4 on the map), you do not have to activate the shrine at all.

When combined with the conditions spammed by other mandragors, the Dreamroot Mandragor's Fevered Dreams makes it by far the most dangerous mob in the mission, so it should be targeted first in the mandragor groups.