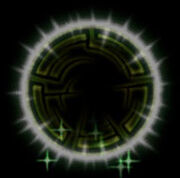 Curses Casting Symbol
This symbol usually appears above the caster while casting a Curses spell.
(For details see: Skill animation)

Curses are used to weaken your foe in a wide variety of ways as well as to cause indirect damage to foes with skills like Spiteful Spirit or Mark of Pain.

One way to weaken an enemy is by removing their enchantments, and this is where curses especially shine. With no fewer than four different skills geared towards removing enchantments and punishing the user, Monks will be much reduced in their effectiveness. A good strategy would be to use Desecrate Enchantments to deal some damage to the user, then either Chilblains or Rend Enchantments to get rid of the enchantments.

Curses are also good at handicapping Warriors. Using the combination of Price of Failure (foes miss with attacks and take damage when they miss), Enfeeble/Enfeebling Blood (gives enemy Weakness), and Faintheartedness/Shadow of Fear (causes attacks to be 50% slower) makes it very unlikely that Warriors will be able to deal any significant damage.

Curses can even be used to handicap spell-casters. Using both Malaise and Wither will give your target a total of 2 energy degeneration, effectively stopping them from regaining energy too fast. Using Spinal Shivers and one of the many Necromancer skills that cause cold damage (Deathly Chill would be a good choice because of its fast casting), or simply wanding (attacking with your wand/staff) with a wand/staff that deals cold damage, will prevent a mage from casting spells.

Curses can also be used to counter another popular method of defense - blocking. Rigor Mortis will prevent a foe from blocking at all, while Defile Defenses will hit the foe with armor-ignoring damage. Curses skills can also reduce the effectiveness of healing to a target through Defile Flesh or Lingering Curse.

Unfortunately, curses are seen as no good on their own and are often underestimated. Appropriate use of Spiteful Spirit can deal substantial damage to clusters of enemies, as can Feast of Corruption. Curses can be augmented by Domination Magic or Illusion Magic hexes for further effectiveness. One example of this is combining the "damage per attack" dealings of Spiteful Spirit and Empathy with the "damage per miss" effects of Price of Failure and using Reckless Haste to deal up to 95 dmg as a Necro/Mesmer and up to 85 dmg as a Mesmer/Necro.

In PvE consider using Mark of Pain if you have a team heavy on physical attackers, as it will deal up to 42 armor ignoring damage to all mobs around the target you hit with physical damage. This is very useful against melee mobs that tend to clump together.