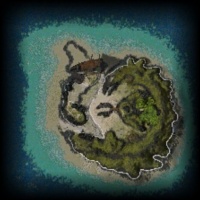 Map of the D'Alessio Arena.

Poison. To the east of the island is a large pool of poison. Characters within this pool suffer 4 health degeneration (8 health each second). Some longer fights are eventuallly led to this pool to speed things up.

Bridge: In the middle of the map is a bridge which leads to the pool of poison. Trappers usually put traps on or under the bridge because of the small area and greater chance of activating the traps.