From GuildWiki
(Redirected from D'Alessio Seaboard)
Jump to: navigation, search 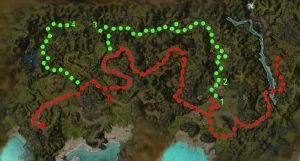 Lend aid to the White Mantle in their fight against the undead.

Follow the path to Hakewood and clear out all the undead there. You will earn a 2% morale bonus for each villager saved. After defeating the undead in the village, make your way to the Temple of Tolerance (point A on the map). At the temple, defend Confessor Dorian from the undead hordes. The undead will attack from both sides of the temple, one group at a time. Try to keep the party near the Healing Fountain, as it provides +3 health regeneration. After the undead assault has been defeated, head west and talk to Dinas to complete the mission (point B).

Dorian tells you to find Dinas after killing the second boss that attacks, but be careful - often there will be one or two additional groups of undead that attack after the second boss, as well as some other undead that may wander too close to the Fountain. To ensure Dorian's safety, the party should make sure all the undead around the temple are cleared before leaving to find Dinas.

Numbers refer to points on the map.

As holy damage is doubled against undead, who comprise the majority of enemies in this mission, this will give you a considerable advantage and shorten battles dramatically. A monk specializing in Smiting Prayers is an obvious choice, as most smiting skills deal holy damage. Characters using martial weapons can bring Judge's Insight or Heart of Holy Flame to convert their attack damage to holy damage.

Benji Makala can survive forever against most of the bosses, but Nizza the Sickle and Kemal the Deadened can kill him, so you'll have to rush in to save him if one of those bosses spawns. You can talk to Benji as soon as you kill the boss to acquire the bonus.

While defending Confessor Dorian, the undead mobs will attack much more quickly than in normal mode, to the point that you may find yourselves fighting three groups at once. Skeleton Monks can resurrect using Vengeance, so they should be first priority. The bigger danger, though, is that someone will run off and grab additional groups before they were supposed to come. Flag heroes and henchmen at the Healing Fountain, and make sure all players stay near it, too. It helps that Confessor Dorian is fairly smart for an NPC, as he stays in the back and heals, and mobs mostly leave him alone.

It is worth noting that several players have had issues with Confessor Dorian being killed before they can even get to him. In at least some spawns the Confessor will never make it to the mending circle, and players will need to run past the ghouls before the bridge in order to save him from the initial spawn. This will, however, trigger the first attack wave as well, forcing the party to deal with the ghouls, the group attacking the Confessor, and the first wave all at once. It appears the attack on Dorian occurs when the party gets to about Radar range from Dorian, and also when the Urn is retrieved.

Justiciar Isaiah: The undead army marches toward the Temple of Tolerance. They've already overrun the valley, and they're moving on the village of Hakewood. Come on.
It's worse than I thought. The undead have taken the whole valley. There are more of them than I thought. You must hurry. The Temple of Tolerance may already be under attack. We need more help. I'm going back to muster more Mantle Knights. You go on to warn the confessor.

Benji Makala: You would make a good White Mantle guard. Just like my brother. You saved my life. Thank you! Most of the White Mantle don't understand the old traditions. But you seem different. There is a small offering out behind Hakewood in our ruined farm house. Just follow the path out the back gate to get there. Could you take it to our local statue of Melandru? Be careful not to drop it!

Gate Guard Makala: I'm not supposed to let anyone through this gate, but you saved my brother's life. The village of Hakewood is in your debt, and so am I.

Gate Guard Makala: I'll let you through, but leave at your own risk. I'll not let any more of those boneheads get to my home.

Confessor Dorian: They will press us until we have killed them all. As long as I draw breath, the Temple of Tolerance shall not fall. When they come, we form a circle around the Shrine of Mending, backs to each other. They come at us from all sides! What evil must lurk in their bones. What villainy spurs them on? I never thought I would see this holy place desecrated by such foul creatures.

Confessor Dorian: Yes, yes I am already aware of the undead army. When the fort fell under attack, I sent my scribe, Dinas, away with a package. He carries the Scepter of Orr with orders to keep it out of the hands of the undead. I would be indebted if you would locate Dinas and return him here to safety.

Dinas: Thank the gods you found me.

Dinas: I know who you are. You're the heroes everyone is talking about!

<party leader>: That's right, and we're here to escort you back to the Temple of Tolerance.

Dinas: We can't go back to the temple. It's swarming with undead.

<party leader>: That's already been taken care of. The temple is safe again.

Dinas: Oh, thank the heavens. Confessor Dorian will be very pleased to have the scepter back. Very pleased indeed.

<party leader>: Then let's not keep him waiting.

Confessor Dorian: Step forward. You have taken great risk today. Placing yourself bravely in harm's way. In the face of overwhelming odds, you and your comrades chose the hero's path. And for that, I am in your debt. For your service to the White Mantle, it is my great pleasure to induct you into our organization and bestow upon you the title of Knight of the Mantle. Arise, Knight of the Mantle, and join your brothers-in-arms.