From GuildWiki
(Redirected from Darkness at Kaitan (2007))
Jump to: navigation, search

"One more scene until intermission, and then I'm off to check out some of the festival games. So, let's get a move on.

Thank the gods you are here, <name>! Things have gone from bad to worse. We've received word that a mass exodus of Naga has descended upon Kaitan Village. It goes without saying that they've fled Raiyan Cave in such numbers for a reason other than to raid. Musashi awaits you in Panjiang Peninsula just outside of Kaitan Village. Protect the villagers from the attacking Naga, and then proceed to the Raiyan Cave and investigate."

Accept: "On behalf of all my fans, I accept this award... *cough* just practicing."
Reject: "I can't work under these conditions."
When asked about quest: "Meet Imperial Guard Musashi in Panjiang Peninsula. The Naga must be stopped!"

"Help! This was supposed to be a reenactment, but the Naga really have poured down from the hills! We must clear them out if the village is to be saved. Hurry!"

Imperial Guard Musashi: "An old friend of mine, a farmer named Lune, lives here in Kaitan. We should talk to him and find out what happened."

"The Naga slithered down the hillside from that accursed cave of theirs and flooded the village. They attacked unprovoked, like cornered animals. I've never seen anything like it. Well, except for last year, when they did the same thing."

Imperial Guard Musashi: "We must get to Raiyan Cave as soon as we can."

Imperial Guard Musashi: "Here it is, Raiyan Cave. Keep your guard up."

Imperial Guard Musashi: "It looks like we've got the situation under control. The portal collapsed, slamming the door in the face of that vile abomination. Report back to Hanso at the monastery. Let him know what we've witnessed."

"You saw a portal, some sort of rift? That must be how these evil spawn are reaching Cantha. It's no coincidence that more and more of these incidents are occurring. Speak to Captain Rujiyo when you are ready. He will likely have more information for you. (Curtain! Well, I'm off to spend my festival tickets.)"

Captain Rujiyo will offer you missions with Victory Tokens as reward. 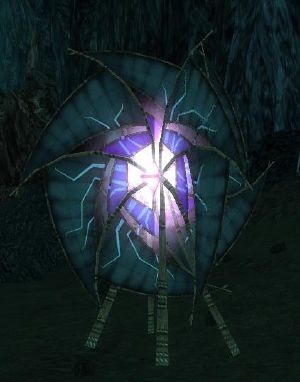 Start from Tsumei Village and meet Musashi outside the Panjiang Peninsula exit. The village contains groups of low-level Naga which will attack the villagers - scour the village and destroy all the groups. Follow the quest marker and speak to Farmer Lune.

Now head southwest to Raiyan Cave, which is dotted with Lesser Grasps. Where the quest marker lies there is a Chaos Rift similar to that found in the Tomb of the Primeval Kings; however, it is an immovable object which you cannot enter. You must now slay every single Grasp in the cave. The Rift will periodically spawn a new Grasp (about one every three minutes), so act fast! Note that you only need to slay the originally present Grasps to complete the quest; the newly spawned ones need not be killed.

Once you are done, the Rift disappears or the fake rift deactivates. Return to Hanso and complete the quest.