From GuildWiki
(Redirected from Darkstone Chest)
Jump to: navigation, search

The landscapes of Tyria, Cantha, Elona, and the known parts of the mists, are all dotted with randomly positioned locked chests, which are guaranteed to contain uncommon or rare items. Whenever your party finds a locked chest, multiple party members can each use their own keys to unlock the chest and get their own loot. Monsters randomly drop chest keys, and you can also buy chest keys from Merchants. Chests differ in regions and can only be unlocked with the appropriate key. A chest can only be opened once per player per time of visiting the area where the chest is in.

A player can open a chest with the corresponding key (i.e. a Krytan Key will open a Krytan Chest). Whoever opens the chest is granted a piece of loot. Therefore, if you open a chest it is not possible for the loot to be assigned to anyone else in your party. Usually, the farther through the game you are the better the loot becomes. The chest loot is randomized for each player so that players may get items of different rarity.

With few exceptions, an explorable area ideally has five locked chests.(Tombs Of Primeval Kings contain 3 chests, so you might want to get 3 phantom keys before entering.) Locked chests will always spawn along with a monster group. Therefore it's not possible to find unguarded locked chests. However, sometimes a chest will be associated with a monster group that has yet to spawn (i.e. a hidden pop-up group like Oni) at which case, approaching the chest will cause them to pop-up.

In areas where there are groups that spawn as a result of taking quests or causing certain triggers (like Luxon groups in the Echovald Forest or Stygian groups in the Stygian Veil), the chest will not appear until the group has been triggered. Previously, such chests were unguarded, but since the February 14th, 2007 update they now only appear when their attached spawns are also able to appear.

Loot in locked chests is usually similar to loot dropped by monsters in the explorable area.

For example, Darkstone Chests in Ring of Fire area display these properties:

Thus, when aiming for specific loot, look for chests that are in an explorable area with monsters that can drop the desired item. 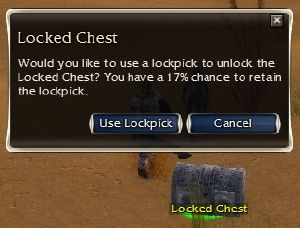 Locked Chests (chests marked only as the aforementioned) are found in both hard mode and Eye of the North areas, and only lockpicks can open them. The open chest dialog will show your chance of opening chest without breaking the lockpick. Hard mode Locked Chests generally contain much higher quality loot than you would otherwise find.

Unlocked chests are chests that do not require a key, and can be opened by anyone. However, the loot can be assigned to anyone in your party. In the Realms of the Gods, completing a quest will usually reveal a chest near the reward giver that is also an unlocked chest.

These chests can also be found at the end of most dungeons in Eye of the North, after beating the dungeon's boss, however, they do not count towards the Treasure Hunter title for opening each one.

Several quests include chests (e.g. the quest "The Royal Papers"). These are unlocked and reveal quest items when opened.