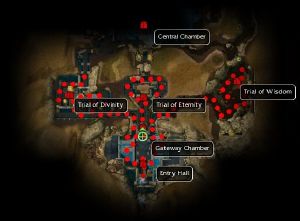 Margrid the Sly must be in your party to enter this mission.

If your character chose to follow Master of Whispers (after the primary quest Mysterious Message) and has not yet gained Margrid, you can still enter this mission (after completing the primary quest Calling the Order) by partying with another player who can bring her. It is not necessary to complete the Dzagonur Bastion mission, but it must be available.

Gain access to the vault's inner sanctum and rescue the two princes.

Goren will meet you at the start of the mission. Talk to him and he will join your party as an ally. Beyond him is the Entry Hall, which is populated by three groups consisting of one Ruby Djinn and two Sapphire Djinns. The former are quite dangerous, as they can spam Searing Flames, so they should be your highest priority to kill. Wait for the mobs in the initial room to pop up before advancing, so that you don't get hit by two groups at once. While it is not necessary to clear the first room, it can be useful to do so just to get the mobs out of your way.

This mission has three "trials" that must be done in three different rooms. Each trial must be passed in order to proceed to the next area. The latter two rooms have traps consisting of jets of flame or ice that shoot from the walls. These will damage and/or slow your party, and can kill you very quickly if you stand in them. Pull any mobs near the jets away from them to fight. When passing by jets, it can be useful to wait until just after they stop firing, so that you know that they won't fire again for quite a while.

The center chamber is filled with the Djinn and Roaring Ethers. In addition, there are six Eternal Guardians, each of which controls 1 of 3 special environmental effects. There are two of each of the following:

There is a lesser and a greater variant to each effect - the Guardians you first meet control the lesser effects, while the ones at the top of the stairs control the greater effects. Each Guardian that is slain will remove one of the effects. Note that Goren is not affected by these effects.

As you enter, you will encounter the first set of Guardians at the base of two stairways on the right and left. Once you kill the enemies before you, you must choose a stairway to climb. The right side is the easier route, because at the top of the left staircase is the bonus chest, and nearing it will cause three more enemies to spawn. Taking the right staircase and circling around to the left side makes this area easier, though degeneration from the Guardians of Suffering will take a greater toll. Once all the guardians in this chamber are killed, this trial will be completed and the left-most door (from the entry hall) will open. While it is only necessary to kill the guardians, it can still be helpful to kill all the mobs in the room.

The leftmost chamber is populated by mobs consisting of Djinn and Roaring Ethers. Kill or avoid these to reach a line of Divine Guardians. Each one will ask a riddle/question, where the answer is one of the Gods of Tyria. A wrong answer will spawn a mob of one Ruby and two Sapphire Djinn for the party to fight, while a correct answer will allow you to advance to the next questioner. Answer all the questions (or defeat the mobs spawned upon a wrong answer) to complete this trial and open the door to the final trial.

The answers are mostly obvious if you have been reading at least some lore regarding the Gods. While the questions posed can vary, the order of the correct answers does not. The answers in order of the riddles posed is:

The rightmost chamber is populated by four Thunders of Ahdashim that must be defeated prior to taking the test, which is a math-oriented quiz. There are four obelisks arranged in a square, each labeled with a prime number (2, 3, 5, and 7). In front of them are six pedestals, each labeled with a product of two distinct primes (6, 10, 14, 15, 21, and 35). Two Crystal Keys lie on the ground, each of which must be placed on a pedestal.

When you put a key in a pedestal, it will mark the two obelisks corresponding to its prime factors. To complete the test, use the keys to mark all four obelisks simultaneously. That is, put keys in 6-35, 10-21, or 14-15. If you get it wrong you will be confronted by more Thunders of Ahdashim.

Once all three trials are completed, you will gain access to the central chamber. This chamber is populated by three bosses:Kormab, Burning Heart, Hajok Earthguardian (Djinn), and Shakor Firespear. Although the three bosses patrol the same area, they are not grouped together. As the bosses are willing to chase a considerable distance once aggroed, it is possible to take them one at a time by careful pulling. You may have to wait a while for them to separate so that you can pull one by itself. Pull and immediately run to make Goren follow you, rather than giving him a chance to run to the boss, aggro more, and die.

The most dangerous boss is Kormab, a fire elementalist who can spam Searing Flames. It is thus adviseable to have some defense against this. You can try to prevent it from being cast via skills like Broad Head Arrow, Distracting Shot, Power Block, or Signet of Humility, mitigate the damage with Ward Against Elements or Ward Against Harm, or clear the burning effect with skills such as Extinguish or Song of Purification. Regardless of your approach, it is useful to use flags to spread out your party.

If you accidentally pull multiple bosses at a time, Kormab is a higher priority to kill than either of the others. Upon killing all three, the mission will end, and you will meet with the two Princes in the final cutscene.

The bonus is easy and there is really no reason not to do it. Each of the initial three chambers contains a special Djinn and a special Chest:

The main difference that hard mode makes is that it is more important to be careful to avoid pulling more than one group at a time. Separating the bosses at the end of the level is especially important.

Goren: The princes are protected in the central chamber of the city. They are locked inside and I can't get to them.

Margrid the Sly: The sealing incantations of Ahdashim only allow those of royal blood to enter freely. All others must face the sacred trials. Luckily, you brought someone along with the necessary knowledge, skill, and valor to gain entry...namely, me.

Diamond Djinn: INTRUDERS! Ahdashim will be your crypt!

Margrid the Sly: The vault's guardian spirits don't look happy to see us. This won't be easy.

Margrid the Sly: Ah, the Eternal Guardians. I thought these were just a myth to scare off wannabe treasure hunters.

Goren: This is bad. The city thinks we are enemies.

Margrid the Sly: Get ready! We'll have to take out these guardians to get through.

Margrid the Sly: Now that we've finished off those pushovers, there's only two more trials to face before the door to the Central Chamber opens.

Goren: How do you know so much about this place, lady Margrid?

Margrid the Sly: Just Margrid, please! I've done some...okay...a lot of research on this place. Every corsair dreams of plundering the Hidden City of Ahdashim!

Margrid the Sly: Sigh. I give up. Let's keep moving. The doors to the other chambers should be open now.

Margrid the Sly: If I remember correctly, this is the Chamber of Divinity. Our knowledge of the gods will be tested here.

Margrid the Sly: Neither do I, but we'll just do our best. Okay, big guy? Those djinn over there look like they're waiting for us. Let's find out what we need to do next.

If you answer a question correctly:

If you answer a question incorrectly:

Divine Guardian: Your knowledge of the gods is lacking. You must pay for your mistake in blood. Should you survive, you may continue the trial.

Margrid the Sly: Now that wasn't too bad, was it?

Margrid the Sly: Toughen up, big man. It's nothing a little absinthe won't take care of.

Margrid the Sly: On to the last trial we go. Let's get this over with.

Goren: What are all these numbered thingies?

Margrid the Sly: This must be the Trial of Wisdom. Not many have made it this far, so I don't know much. The numbers are supposed to be the key.

Goren: Not math! I hate math. It makes my brain hurt more than god tests.

Margrid the Sly: Hmmm. Interesting. It looks like those crystals will fit onto the pedestals.

Goren: The door to the princes open now?

Goren: I have a bad feeling about this....

<party leader>: What good is security when your people are suffering?

Margrid the Sly: And if we can get to you, can't Varesh do the same?

Prince Mehtu the Wise: No, no. You're right. We should use the djinn to protect our people, not ourselves.

Prince Mehtu the Wise: We have been terrible fools.

Prince Bokka the magnificent: Speak for yourself. Obviously I must find a secure location! Goren! Fetch my sedan chair!

Goren: Fetch it yourself. I quit.

Prince Bokka the Magnificent: Quit? I am your ruler. Your leader!

Goren: A real leader earns the loyalty of his people. He doesn't bully them.

Margrid the Sly: Forget it. There's more to life than just money.

<party leader>: What did you say?

Margrid the Sly: Don't ever say that I said that. It would cost me my reputation.

Margrid the Sly: What the-

Margrid the Sly: What is that?

<party leader>: It means we are too late. Nightfall has come to Elona.