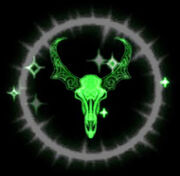 Death Magic is a necromancer secondary attribute, meaning that any character with necromancer as their primary or secondary profession can put points into this attribute.

The Guild Wars description hits the nail on the head in its description for this attribute. Death Magic is useful in three ways: undead minions, manipulating corpses, and dealing direct damage.

Undead minions—that's what Death Magic is all about. There are currently nine skills that raise minions: Animate Bone Fiend, Animate Bone Horror, Animate Bone Minions, Animate Shambling Horror, Animate Vampiric Horror, Malign Intervention, and the Elite skills Animate Flesh Golem, Aura of the Lich and Jagged Bones. All are different in how they function, but basically they all raise up another ally (or two in the case of Animate Bone Minions) for you. Also, Death Magic possesses many skills to help your minions, or keep you alive using them. These include Blood of the Master and Verata's Sacrifice to heal all your minions, and Infuse Condition and Taste of Death to protect yourself at the cost of your minions. Guild Wars Nightfall has introduced many more creatures that raise minions than previous Chapters.

Other than raising minions from corpses, Death Magic skills also can manipulate corpses in other ways. Using Necrotic Traversal or Putrid Explosion is a great way to deal damage to hordes of foes at once. Consume Corpse and Soul Feast both utilize a corpse to heal you. Finally, putting up a Well of Suffering or a Well of the Profane using a corpse is a great way to put the hurt on your opponents.

Finally, Death Magic can deal direct damage in a variety of ways. Deathly Swarm deals cold damage to multiple foes, while Deathly Chill does both cold and shadow damage. Toxic Chill and Vile Miasma each strike initially with cold damage, then have the ability to cause degenerative effects. Then there are disease related skills such as Virulence and Rotting Flesh which can "soften" mobs, as well as "bomb" skills like Death Nova, Putrid Bile, and Rising Bile that can inflict significant mass damage.

As of the 04/26/2006 update, your maximum number of controlled minions is limited by your rank in Death Magic. You start with two, and for every two ranks, you can command an additional one (the maximum is therefore 10 with 16 Death Magic). Additional minions summoned beyond this limit cause your minion with the fewest hitpoints remaining to die. The game does not distinguish between minion type when determining how many you can control (except for the animated Flesh Golem).