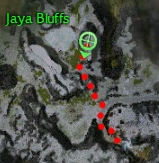 Note: This quest is not available if you do The Rite of Valor from Gull Hookbeak.

Take Yorrt Strongjaw over to the group of Sensali with Crow Razorbeak to the south-west and let them kill him. Then pick up his club and return it to his son, Trrok Strongjaw, east of where you met Yorrt.

This quest is not available if you complete The Rite of Valor. Both quests produce the same reward.

There is a mistake in this quest's description from Yorrt Strongjaw - he says 'Yorrt Strongjaw face them and kill them.', when in fact he wishes to be killed by them, not the other way round. Typical Yeti Pride.