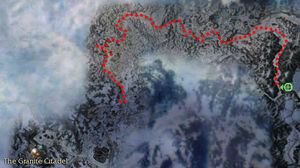 Vision of Glint in Droknar's Forge

"Titan Lord Evirso Sectus and his army are amassing numbers out in Mineral Springs. We expect that as soon as the army is big enough they will attempt to overtake Droknar's Forge. Break through the ranks of titans to find the Lord and the rest of his underlings. Killing the Lord would put a huge dent in the titan force and convince the rest of them to retreat."

Accept: "As a friend of the Deldrimor Dwarves, it would be my honor."
Reject: "Find someone else to do your dirty work."

"Your efforts have put the Titan army into disarray, but there is still more work to be done. Their presence is spreading throughout Tyria, and they must be stopped!"

This quest is straightforward in terms of where to go and what to do. Getting there through the titans is the difficult part. The forces of titans in this region are led by the gigantic Frost Titan; upon its death it spawns an Icy Brute and a Titan's Malice. The Brute will spawn a Dark Titan and the Malice will spawn a Titan's Heart.

Travel to Granite Citadel and take the northern exit into Tasca's Demise. Here you will get your first taste of the new titans. With this quest accepted, the area now contains mesmer titans (Titan's Malice) and monk titans (Titan's Heart). Head northeast to exit into Mineral Springs.

At the first fork in the road, take the right path and stay with it. It will weave and turn until you reach a resurrection shrine. Past it, you will find a narrow path in the mountain. Inside that path you will find Evirso Sectus, a necromancer boss.

The following bosses can also be encountered: 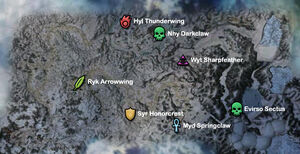