Dishonorable is a Hex Spell generated automatically and only by an ArenaNet given server to one player's account for violating the game's standards of conduct and etiquette (see PvP). It works like any other hex, causing a negative effect for a period of time. It is only visible and effective in PvP outposts and Guild Halls.

An account may be given dishonor points for leaving a PvP match prematurely, for being reported by team mates, or for reporting teammates for leeching. Dishonor points affect game types that have randomly formed teams such as Random Arenas, Alliance Battles, and Competitive Missions. 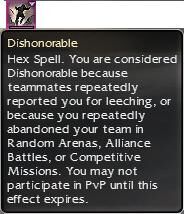 If you accumulate 10 or more dishonor points, your account changes status to Dishonorable, with the following effects: