From GuildWiki
(Redirected from Divinity Coast)
Jump to: navigation, search 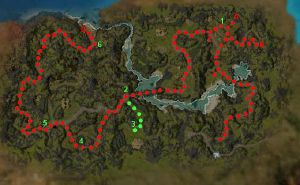 After a short journey to Shaemoor, Justiciar Hablion (point A on the map) will tell you to cleanse yourself in the Fountain of Truth (point B). Clear the three groups of Mergoyle Wavebreakers on the hill to activate the fountain, then walk through it to become Cleansed. Speak to Hablion again to receive the Eye of Janthir and escort it to the village of Loamhurst. The eye will follow the party, alternately hovering above the head of all human players who cleansed themselves.

Talk to the Shaemoor Gate Guard (point C) to open the gate. Now simply escort the Eye to the shrine in Loamhurst (point D) to complete the mission. On the way, you will receive a 2% Morale Boost for each of the Merchants you save from the Tengu (between points 2 and 5). You may also notice some Villagers joining your party as allies; these are part of the mission's bonus (see below).

In combat, the Eye will also perform an AoE knockdown on all foes in the area every 5 seconds. This can be useful, so make sure to have the Eye close to your foes. To make sure the Eye is close to your enemies when fighting, you can have only the tanks of your party cleanse themselves.

One issue some players report with this mission is that, even though it seems to float through the air, the Eye can get body blocked if you run past any groups of enemies without killing them, which can be annoying if you don't notice until much later in the mission. Another difficulty arises if you field a purely defensive team build, as the White Mantle Abbot at the Fountain of Truth will heal the Mergoyle Wavebreakers with Heal Area and Heal Other. This, in turn, can prevent the Fountain from being 'activated' and subsequently cleansing you. It is therefore advisable to either bring at least a decent amount of damage or to have a back up damage-dealer.

The bonus in this mission is to find the five Chosen and escort them all safely to Loamhurst. After receiving the Eye of Janthir, it will "judge" people it is brought near to and reveal any magic that they may have. NPCs who fail the test are knocked down; those are not knocked down after being tested are Chosen and will follow your party.

All of the Chosen are Villagers and can be found at the numbered points on the map, which correspond to the numbers below. They will be added to your allies list when you approach, but will not follow you until the Eye has tested them. If any of the Chosen die, you fail the bonus. Like many allied NPCs, you need to constantly ensure that the Chosen are still following you.

Each Chosen is "safe" until you get within compass range, at which point a mob will spawn near the Chosen and start attacking. Ordinarily, the party would need to reach the Chosen as quickly as possible, and then immediately take aggro or heal to keep them alive. One method that mostly avoids the risk of this situation is to use the mission map to flag heroes or henchmen near the Chosen before starting your approach. Heroes and henchmen will not trigger the spawns, so they are able to intercept the attackers right away once you begin the approach. Even if you do not know precisely where to place the flag for optimal results, your party will still get a significant head start by approximating the correct location. If your party consists only of players, consider bringing skills that increase movement speed.

The party will be rewarded with 100

per Chosen saved, multiplied by the number of players. The gold is given as a lump sum and shared with the party. Note that heroes or henchmen will take a share of the gold, but will not increase the multiplier. Thus you may receive as little as 16

per Chosen saved. This reward is independent of the bonus itself (you will receive it even if you fail to save all five Chosen, and you will still receive a separate 500

reward the first time you complete the bonus).

It is possible, and many players find it easier, to save the Chosen in a different order than given above. To save the third Chosen before the second, don't cross the bridge, but take the path down to the river past the Lightning Drakes. On the southern bank is a path that leads up into the area where the third Chosen is. Often the Tengu will not attack him this way.

The fifth Chosen can be saved before the fourth by staying on the main road and heading directly to her. You will have to go through more Tengu this way, and if anyone wanders too far to the south they may trigger the Ettins to attack the fourth Chosen,

Saving the Chosen when encountered and then keeping them alive is required for the bonus. Keep in mind the Chosen follow the Eye and do not follow Hero commands. They will therefore tend to wander into the disease muck. To avoid this you may need to exaggerate your movements around the muck, waiting for all to catch up, before changing direction to go around the next pool.

The mission is pretty easy in hard mode with about the same tactics as in normal mode. The bonus, however, is not. For all villagers after the first, mobs near a villager will start attacking once a player comes just inside radar range, and will typically kill the Villager before you get within range to heal. This can be just barely overcome by having a healer with a good running skill lead the party and slap a couple quick heals on the Villager.

Heroes and henchmen do not trigger mobs to start attacking the villager, though, so you can flag them way ahead of the players in your party and have them standing right next to the villager when mobs start attacking. If you are the only player in the party, this is by far the easiest way to save all five Chosen and protect the ones already in the party. Three heroes and two henchmen, including two healers, can easily handle a group of Tengu or Ettin warriors on their own, so you can flag them ahead and let them fight. If there are multiple players in the group, you can still flag them ahead, but you’ll have to join in the fight before they die.

The only mobs that can attack villagers at their spawn points are warriors (in groups of three), so anti-melee skills can help immensely. An earth elementalist hero can help significantly, with Eruption to blind the foes and Ward Against Melee and Ward of Weakness to further decrease the threat to the villagers.

With the villagers in your party, you’ll have to be careful about pulling, because if you run away from a fight, the villagers won’t and will probably die.

The second villager will be attacked by one group of Tengu as soon as you come in range. The third villager may be safe, but will often be attacked by one or both groups of Tengu. When you reach the fork in the road after the third villager, go west rather than south. You can try to save a merchant by flagging heroes ahead if you like, which gets you a morale boost and some practice, but nothing more. From the spot where the merchant spawns, to the west will be another merchant just inside radar range, and he will be attacked by three Tengu and quickly die. Further west, just outside of radar range, will be another merchant and three Tengu who will attack him when you come close. Just west of him will be a villager, who won’t initially be under attack, but once the second group of Tengu kills its merchant, they’ll proceed to the villager.

If you’re alone, you can flag your heroes and henchmen ahead to kill all the Tengu in this area. If not, flag whatever heroes you have ahead, but once they come under attack, you’ll have to run up to help out. Go after the back group of Tengu to save the villager, but help with the front group of Tengu, too, as they can kill the villagers you’ve already saved. This fight gets chaotic, and you may take some deaths, but it is manageable.

The last villager (fourth villager above) usually is not under attack, but if it is, it will be from Ettins, which can kill faster than Tengu. It’s safer to flag heroes ahead just in case.

Justiciar Hablion: My friends! I am happy you made it in time for the testing of the chosen. This is the Eye of Janthir. It has the power to see inside a person and discern his or her magical aptitude. You will be taking it on to Loamhurst. Those who show promise will get to study with the Grand Masters at the Temple of the Unseen. But first you must bathe yourselves in the Fountain of Truth up on the hill to the southeast. Return here once you have been cleansed.

Justiciar Hablion: Well done. As you can see, the Eye will now follow you. All those whom you come in contact with will be judged by the Eye. Those who are deemed worthy will join you in your trek to Loamhurst. The unworthy will be humbled. Good luck. Travel safely my fellow Knights of the Mantle.

Shaemoor Gate Guard: You must be quite gifted to be given the honor of escorting the Eye.

Villager: Thank you! When our caravan was attacked several of us scattered into the hills. If any of them are Chosen it would be your duty, as the keepers of the Eye, to find and escort them safely to Loamhurst.

Lionguard Minah: You have delivered to us the Chosen without letting any of them fall. As a token of our appreciation, please accept this small gift.

Justiciar Lashona: Well done, my friends. You have done the White Mantle a huge service. We'll take it from here.

Justiciar Hablion: My friends! Welcome to Shaemoor. This is the Eye of Janthir. It has the power to see inside a person and discern his or her magical aptitude. Those it gazes upon will be judged, either rising to glory or falling in shame. You will be bringing it to Loamhurst, taking those whom it deems worthy with you. But before it will follow you, you must first cleanse yourself in the Fountain of Truth, up on the hill to the southeast. Once you have been cleansed, come back to retrieve the Eye, and you can commence administering the test.

Justiciar Taran: When they're ready, escort all of the Chosen to the caravan.

Justiciar Taran: We leave within the hour.

Justiciar Taran: What was that?

Justiciar Rhynnon: It came from over there.

Justiciar Taran: It's an ambush!

Chosen Villager: Oh no! It's the Shining Blade! Dwayna protect us.

Saidra: Quickly, take the Chosen into the jungle.

Saidra: Keep quiet. Your suffering will be over soon.