"I hate it here. It's smelly and I miss my old home. If only mother would let me go back for my treasure, then I might be happy. But, it's "too dangerous." No, you couldn't possibly get it for me. Ha! My treasure is so well hidden, only the bravest and smartest would dare to even try! I doubt a mere Sunspear could do it. Yeah. That's right. I just called you a dumb coward. Even if I told you how to find it, you'd just get lost. Oh, you gonna cry now? Fine. I dare you to find my treasure. No, I double dog dare you!"

Accept: "I'll take up that challenge, little man. No one double dog dares me and get away with it!"
Reject: "Go away kid. You bother me!"

"Bobo! You found him! I guess I underestimated you. I'll keep that in mind should we meet again." 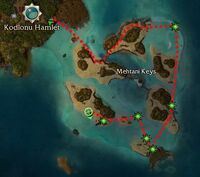 The land where water sparkles and dunes hide gold is Mehtani Keys.

Head south and if you look to your east, you'll see a rock formation with a big woman's head on it. Some people say that Ajamduk, Hunter of the Sands, is actually a mandragor queen and so she seems to be looking south which is the way you should go. Continue heading south, and the angry bear is actually a man living alone named "Behrdos". He starts to complain when you get close enough to him.

Keep heading south, and you should see a large temple-like building. Walk to the doors and it updates into the next phase.

Next turn northwest, and walk until you're under the two pillars that are pretty close, you can count the paces if you want.

Turn north-northwest, and you'll see one pillar that is knocked over while the other three are standing. Walk over to its base.

Head west, until you see a wrecked and split in half boat on the beach, it should have a decent amount of corsairs around it, kill them.

On the northwestern side of that rock, where there's a kind of a little indentation and some rocks surrounding the edge of the sand/water area, face the rock (you'll be facing southeast) kneel (type /kneel), and it gives you Ashigun's brown teddy bear, named, "Bobo".