Difference between revisions of "Dragon Festival 2007" 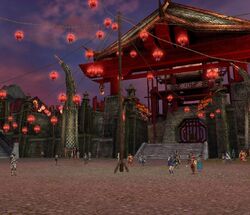 The Monastary is a-light as the citizens party!

The Dragon Festival 2007 is an upcoming event taking place over the weekend of July 6, 2007. It was announced in the Guild Wars login announcements:

This weekend, Canthans celebrate the historic Dragon Festival. Enjoy quests and games and prizes, oh my! Visit the Boardwalk, jump into the Dragon Arena, score cool prizes, too. The event takes place in Shing Jea Monastery starting at Noon Pacific (-7 GMT) on Friday, July 6 and it wraps up at 11:59 PM Pacific on Sunday, July 8.

The main prize is called the Demon Mask.