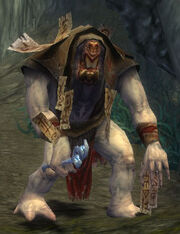 Molachev, a leader of the Dredge, wearing the robes and (apparent) prayer strips of a typical Dredge spell caster

The Dredge are a race of intelligent subterranean creatures that dwell deep below the ground in the Shiverpeak Mountains. They are humanoid in shape, but their heads are those of moles with tiny eyes and two large front teeth. They have a rather primitive civilization compared to their dwarven neighbors, although this may be a result of their enslavement.

Like many other species of the Shiverpeaks, the Dredge have been enslaved by the Stone Summit. They work in the mines of Sorrow's Furnace where their digging talents and comfort in the dark makes them superior to humans as work grunts. Some among the Dredge have surrendered to this, while others have resisted. The leader of the rebel movement trying to free the Dredge from slavery is Molachev.

Several of the Dredge managed to escape from Sorrow's Furnace, and flee to Cantha. They can mainly be found in the Echovald Forest. The initial dialog for the quest Envoy of the Dredge proves that the Dredge fled from Tyria to Cantha, and not the other way around, by digging a tunnel through the world. It is currently unknown where the entrances to the tunnel may be, or if it still even exists.

For a list of all types of Dredge, see Category:Dredge.