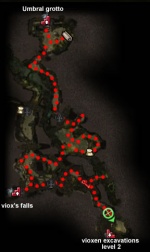 "I recently escaped from the most terrible places. We were moved there after adventurers destroyed the Iron Forgeman in Sorrow's Furnace. Near here lies an excavation led by an evil necromancer named Bellok. The earthquakes tore open an ancient crypt where Bellok hopes to harness the power of an ancient lich. His taskmasters work my brothers 'til they are no more. Please, help us poor Dredge reunite the moletariate and rise again in unstoppable numbers! You must free my people!"

Accept: "Hi-ho, hi-ho. It's off to revolt I go!"
Reject: "This seems vaguely familar, and less vaguely painful. I'll pass."

"Thank you for saving me!"

Player response: "I'll be on my way."

Zoldark the Unholy: "Excellent. You're just in time to feed my children...."

"Thank you! You have struck a great blow for the moletariate, hero! Perhaps I'll include you in my next manifesto."

Level 1: Enter the Vloxen Excavations from Vlox's Falls and head east into the dungeon through groups of Stone Summit with Dredge Slaves. Soon you will find a Stone Summit boss called Taskmaster Durgon; defeating him will release some Dredge Slaves and drop the Boss Key to next level.

Level 2: Your task in this level is defeating Taskmaster Kurg and Taskmaster Bellok. It is advisable to pull Bellok's group away from the nearby resurrection shrine (although they will follow quite far); otherwise, if your party wipes, you will be swarmed repeatedly as you respawn and can easily reach high Death Penalty (or even defeat in Hard Mode). After Bellok is eliminated, one of the freed Dredge Slaves will show you a way to Powder Kegs to blast through a cracked wall and gain access to the dungeon's third level.

Level 3: On this level you will need to find Sotanaht the Tomb Guardian, who holds the key to access Zoldark's room. The third level also contains 2 levers which disable all the poison traps there: one in the northwestern room, and one just beyond Sotanaht.
To kill Zoldark the Unholy, repeatedly kill his minions until he stops resurrecting them. He loses health every time he resurrects one and has no health regeneration as well as no healing skills at all. Zoldark should be quite easy to kill once he is unable to resurrect his minions.