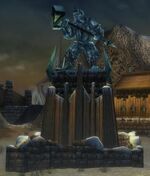 Droknar was a king of the Deldrimor Dwarves, long ago, when the tribes of Deldrimor were united under one banner.

The king's seat during Droknar's reign, and the capital of the nation, is the city now known as Droknar's Forge.

Droknar can be found in the Epilogue of Guild Wars Eye of the North. Although the typical weapon of the Dwarves (and the weapon he wields in his statue at Droknar's Forge) is a hammer, he is holding an axe in the Epilogue. Also, if a dwarf were to carry an axe, it would probably be the Dwarven Axe. However, Droknar chooses to sport a Chaos Axe. This is likely to add to his ghostly appearance. He will give each character a Droknar's Key when they reach him for the first time. This key can be used to obtain one unique item from the chests in the area. Each Profession has its own chest, and its own set of weapons. See below for list of weapons.