Duel of the Houses 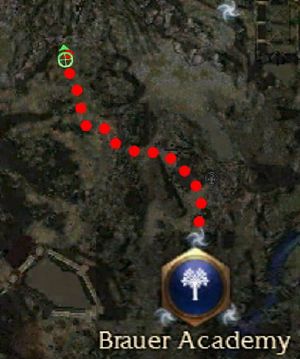 Duel of the Houses Map

Duel Master Vaughn in Drazach Thicket near the north entrance to Brauer Academy.

"Duels have long been part of Kurzick life, though these days they are used primarily as a method of training for battle against the Luxons. Today, one of our Kurzick Houses has come forth to challenge you that you both might be better prepared when the time comes to face the Luxons in combat. Do you accept the challenge they have set forth?"

The dueling grounds is a short distance to the northwest of where you obtain this quest. If you travel close the the sides of the cliffs to your right it is very easy to get to the dueling grounds without aggroing any enemies. The only group that might slip into your danger zone is a small group of warden at the end of the path.

There will be a group of eight NPCs at the dueling grounds, which will be friendly until the party moves within range. Once he arrives, Duel Master Vaughn will give a little speech; the opposing duelists will turn hostile as soon as they come into contact with any player characters. There are at least four different fixed teams, similar to the Zaishen Challenge, which also are of different difficulty:

A team of three mesmers including Lord Brauer, three elementalists and two monks. All members of this team group together, with the elementalists maintaining multiple wards around the group. AoE spells would be advisable here.

A team of four necromancers including Count Durheim, two elementalists and two monks. They have strong anti-melee skills and spiking capability.

A team of five rangers including Lord Lutgardis, two monks and one ritualist.

Tip 1: As with the Jade Arena quest, Frozen Soil may be useful to disable the duelists Resurrection Signets. Interrupt skills also do not go amiss.

Tip 2: Occasionally there is a bug where a group of Oni will spawn next to the duelists and begin attacking them. The duelists will not fight back as long as you do not trigger the cutscene that makes them unfriendly toward you. Their monks will still heal the group, however it isn't enough to keep up with the damage from the Oni. If you are patient enough the Oni will eventually overpower and wipe out the duelists leaving only the Oni themselves to deal with, and you will receive credit as if you had killed the duelists yourself. If the Oni do spawn it is highly inadvisable to proceed to the dueling ground as you will not only have to face the duelists, but the Oni will begin attacking you as well.