Dzaga is the leader of a band of smugglers. Churrlan at the Sunspear Great Hall has learned of a major smuggling deal about to take place and was pondering how to infiltrate Dzaga's gang. 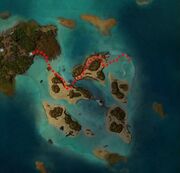 "Well, look what the cat dragged in. Who are you and what do you want?"

Is this the place that needs folks for the job?

"Who? I know no such person. Looks like we've been compromised. Get'em boys!"

"Who? I know no such person. Looks like we've been compromised. Get'em boys!"

"So Kehtmah sent you my way, eh? Well, let's get you set up with the men. Should be a quick and easy job as long as things go smoothly."