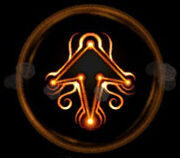 Earth Magic is an Elementalist secondary attribute, meaning that any character with Elementalist as their primary or secondary profession can put points into this attribute.

"No inherent effect. Many Elementalist skills, especially spells which protect you or your allies or deal earth damage, become more effective with higher Earth Magic."

Earth Magic, like Water Magic but unlike Fire Magic and Air Magic, has a variety of skills. Earth has more popular defensive skills than the other elemental attributes, and a few powerful spike and AoE spells as well.

For protection, Armor of Earth and Kinetic Armor provide the caster a large armor bonus, and Magnetic Aura blocks 75% of melee attacks while Sliver Armor blocks attacks and deals earth damage back to the attacker. Earth Magic also possesses five defensive wards; Ward Against Foes, Ward Against Elements, Ward Against Melee, Ward of Stability and Ward of Weakness.

Stone Daggers and Stoning cause large amounts of damage to a single foe, while Earthquake and Aftershock damage many foes. Aftershock is popular as it deals extra damage to knocked down foes, requires little energy, and has a near-instant cast speed.

Earth Mages can excel against armored targets, using Obsidian Flame and Crystal Wave. Crystal Wave hits multiple enemies, but also cures them of all conditions. Obsidian Flame targets only one enemy and the energy cost, casting time, and recharge time are all low, but it causes exhaustion, making it difficult to use repeatedly.

One method of spiking with Earth magic uses Mesmer as a secondary profession, casting either Echo or Arcane Echo and then Obsidian Flame. Since the spell has such a low recharge time, the caster can use both copies of the spell multiple times in a short period of time, dealing extreme amounts of armor-ignoring damage. This will cause severe exhaustion, putting the caster out of the fight for a little while.

Earth Magic is popular with Warrior primaries because of its bonuses in melee combat, and also because the area-of-effect spells affect enemies around the caster. It is common for hammer warriors to knockdown enemies and then cast Aftershock.