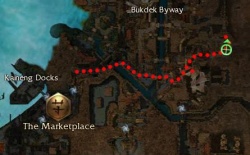 "I have come into possession of some reliable and disturbing information. The Jade Brotherhood is gathering in large numbers in Bukdek Byway to confront the Am Fah. Such a brawl can only mean disaster for the good citizens of Cantha. The city guard does not have the resources to deal with this threat, but perhaps you would be willing to handle this matter?"

Accept: "Leave it to me."
Reject: "Doesn't YOUR name begin with Guardsman? This sounds like a job for you, not me."

"The city guard is forever in your debt."

Head east from The Marketplace into Bukdek Byway. Kill Kenshi Steelhand and the Jade Brotherhood mob closest to him (around 10 hostiles in total). Return to Kaineng Center to get your reward from Guardsman Chienpo.