From GuildWiki
(Redirected from Elona Reach)
Jump to: navigation, search 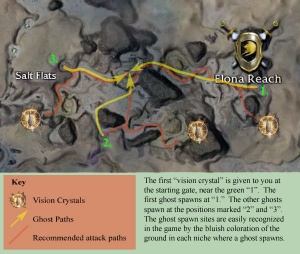 This is a mission entry. For information on the mission outpost Elona Reach, see Elona Reach (outpost).

Help the Ghostly Hero complete the ritual that will combine the three pieces of the Vision Crystal.

In this mission, you need to collect three Crystal Shards and return them to the Ghostly Hero. After bringing the first one, you have 30 minutes to gather the other two.

There are Splinter Mines throughout the mission, which cause crippling and bleeding in a large AoE. They are set off when players get too close, and will then emit a green blast at regular intervals. They can be stopped by picking up the mine core, but there will be one last blast. If you leave the area of effect quickly, however, you can usually grab the core without being caught in it. Dropping a mine will have the same effect on enemies (remember that non-boss Enchanted can't suffer from Bleeding). Interestingly, the ritual priests can be afflicted with Bleeding and Crippled from Splinter Mines, even though they are technically undead.

The first Crystal Shard is easy enough: you have no time limit for this one, so you can kill everything. Take it slow and don't get killed. Just go straight down the path (either over the bridge or under), and talk to the Ghostly Hero at the end, where the arrows converge. He will start the countdown for the remainder of the mission. If you have awakened the first ghostly priest (see Bonus section below), the Ghostly Hero will give you the bonus objective.

The Forgotten Sages are potent healers with Word of Healing. No group has more than one sage, but it generally helps to kill the sages first, to prevent them from healing other mobs.

When heading west to the western crystal shard, it helps to pull the first group into the fort to get it out of the way of the second group while you kill it.

On the way to the central crystal shard, there is a bridge about halfway between the shard and the Ghostly Hero, but it is difficult to properly pull mobs in that direction, so it is better to go around the bridge. There are two groups of a Forgotten Sage and two Forgotten Arcanists each that patrol just south of the bridge. It helps to pull and kill one group at a time. If you do not pull the first group you fight far enough, the sage from the other group may also come up to heal, which can be a problem. Only after both such groups are dead is it safe to pull and kill the boss group at the south end of the bridge. Another roamer group wanders just north of the crystal shard. This group is most easily killed by waiting until it wanders into the corner to the west of the shard, and then attacking it there.

While this mission has a 30 minute time limit, that is ample time, so it is often adviseable to ignore the clock. Rushing ahead usually gets the party killed, and the mission can be completed well within the time limit in almost all cases. One way that the timer can get low is if the monk boss, Wissper Inssani is in your path and the group lacks sufficient damage to kill it through its healing. If the boss is at either crystal shard, the group can safely grab the crystal and run away without needing to kill it.

The remains of each priest can be found in closures like this one.

The bonus is to revive the three priests Hehmnut, Kahdat and Nahtem with a Vision Crystal. The trick, though, is that there is one before you get to the Ghostly Hero the first time. So, as soon as you get the first Vision Crystal, on your right there should be two Dune Burrowers. Behind them is the tomb of the first ritual priest (1 on the map). It is not necessary to keep the priests alive after reviving them.

Note that just getting near the priest while holding a Vision Crystal will revive him; he will then start a slow march up to the Ghostly Hero. He will engage any hostiles on the path and most likely die. That's not a problem, because your objective is only to revive him, not to ensure that he survives. If you want to save the priest, you can drop the crystal, clear the path, and then go back and revive him.

The other priests are revived at points 2 and 3. The normal course of doing the mission will clear nearly to them, though there is one additional group of mobs at point 3 that you need not clear if doing the mission only. Otherwise, all you need to do for the bonus is to carry a Vision Crystal to the bones of the remaining two priests after you get one. You can use the same Vision Crystal to revive both priests.

Pull the big group of Minotaurs away from its spawn point, as several more minotaurs wander back and forth in the area and will join in the fight if you don't.

There are two types of difficult groups after the cut scene, and several copies of each such group. One such group has a Forgotten Sage, a Forgotten Cursebearer, and two Enchanted Swords. The sage is an extremely potent healer that can heal about 2/3 of its health with Word of Healing, so it's difficult to kill other mobs without first killing the sage. Even if you can, the sage also has Restore Life. It helps to be able to daze the sage so it can't heal itself as effectively. The rest of the group of mobs can deal considerable damage, so it helps to bring some anti-melee skills to dampen their damage output while the group mostly focuses on the sage.

The other potentially difficult type of group is one sage and two Forgotten Arcanists. Again, the group must focus fire on and kill the sage first. The arcanists have Earthquake, so it can help to spread out or have one character watch arcanists and interrupt earthquake.

The group in the corner slightly south of point 3 is close enough to another group with a sage that the other sage will sometimes come up to heal, even if you don't pull the other group. It helps to pull the former group away from its location to prevent this, though it won't chase you very far.

Briefing from the Ghostly Hero.

Ghostly Priest: My master searches for the three shards of the Vision Crystal. If you bring them to him, he can complete the ritual that will fuse them back together. But be warned: The Forgotten hold two of the three pieces. They have set traps to keep us from getting them. Here is the first piece. Take it to my master, and he will begin the fusion ritual.

Ritual Priest Kahdat: In our failing we learned the error of our ways. I will help our great hero complete his ritual. Thank you for this second chance.

Ritual Priest Hehmnut: It was greed and mistrust the drove my brothers and I apart. The glory of the gods will shine upon us once more. You have seen to that.

Ritual Priest Nahtem: Just as the crystal was in shards and scattered, so were my brothers. It destroyed us in the end. In death we can regain the glory of the gods.

Ghostly Hero: I am grateful. You have brought me the first shard. Now I can begin the incantation to fuse together the Vision Crystal. And so begins the test of the Elonians. This was where my people failed to Ascend. When assembled, the Vision Crystal can focus the gaze of the gods and deliver to you the Ascension that you seek. You've brought me the first shard, but you must still retrieve the others. Ultimately it was greed that was our undoing. The shards of the Vision Crystal were kept in separate camps, for we did not trust each other, not even our own kin. To pass this test, you must retrieve the remaining two shards. There is one in each base. Return here with the shards, and I will cast the ritual to fuse them back together. But you must hurry. Once the ritual begins it cannot be stopped. If I do not have all three pieces, then all of this will be for naught.

Ghostly Hero: The Vision Crystal is complete. Your day of judgment at Augury Rock is near. The gaze of the gods shall be focused upon you, and your path will be made clear.