This glossary entry is a stub. You can help by adding to it according to the style guide.

Enchantments from left to right: Maintained, standard, and Dervish

An Enchantment is "A spell that causes a positive effect for a period of time (e.g., speed, increased armor, increased Energy)."

Enchantments can give a variety of positive effects, such as an increase in armor, a reduction in Energy cost, or even converting damage into healing. As they are spells, enchantments are only available to casting professions. In addition to standard enchantments, there are two subcategories of that each have specific properties. 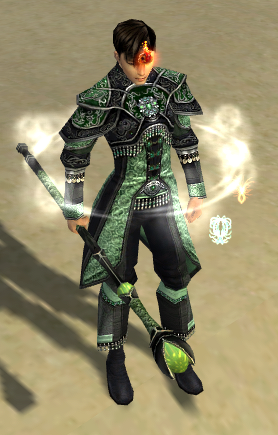 The 'white ring' caused by an enchantment

It is usually easy to visually tell when characters are enchanted because many enchantments display a white ring around the torso of the affected character, with a revolving icon indicating the profession of the caster. A golden up-arrow at the end of a character's health bar also indicates the presence of an enchantment. A player can determine the enchantments affecting them by looking at the Effects Monitor, normally located in the top left of the screen. Enchantments are indicated by the same golden up-arrow as displayed on the health bar. Dervish enchantments have a blue background rather than the standard green coloration.

Enchantments placed on a target will either last for a specific time (like Aura of Restoration), until a condition is met (like Illusion of Weakness) or will last as long as the caster maintains the upkeep cost of -1 pips of energy regeneration (like Life Barrier). Maintained enchantments will end if the distance between the enchanted target and the caster ever becomes greater than the radar range. Certain enchantments can be renewed without being recast, such as Critical Defenses.

For a list of skills that can remove enchantments, see enchantment removal skills quick reference.

These skills involve enchantments in other ways: