Warning: The following text contains spoilers relating to the plot of Guild Wars Eye of the North.

The Epilogue is an explorable area in Guild Wars Eye of the North. It is a special instance of the Battledepths.

Can only be accessed by completing the A Time for Heroes quest, which means defeating The Great Destroyer. If you want to re-enter after leaving, you have to complete the quest again. 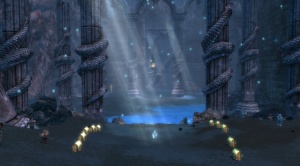 This is the area where the party starts out in. 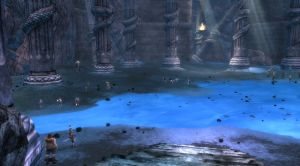 This area contains several individual groups gathered to celebrate the victory over The Great Destroyer.

Several Heroes gather at the foot of the second set of stairs to discuss the victory. After the dialog is over they return to their individual groups.

Ogden Stonehealer stands at the top of the second set of stairs nearby this group and moves to his group of Dwarves after the main dialog. He is not involved in the dialog at all though.

The second group - located a short distance to the East of the first group.

To the northeast of the first group you can find Anton by himself.

The largest of the two groups is located near the middle of the chamber.

The second group is located just north of the larger group.

Their group can be found located near the door to the northeast of the center of the chamber. Blimm seems separated from Oola's group due to their mutal distaste for one another.

Their large group is located in the South Corner of the main portion of the chamber.

In addition to the large group several other NPCs Are located in the general area:

Their group is located at the far end of the chamber from where Droknar stands.

Their small group is located in the East Corner of the main chamber.

This dialog displays when you approach Gwen, Pyre Fierceshot, Jora, and Vekk. After the dialog is over they return to their individual groups.

Gwen: "These bad guys should know by now. You can't stop a real hero."
Pyre Fierceshot: "When you set your mind on victory, the world has no chance but to hear you roar. That is the difference between a hero...and a corpse."
Gwen: "The Charr is right...this time. I suspect the world has not heard the last of you!"
Jora: "A human agreeing with a Charr? Without insults? Strike me senseless!"
Vekk: "I am amazed they even talk to each other. There may be hope yet."

Captain Langmar: "Hearing <name>'s heroic tale gives me real hope for Ascalon."
Artificer Mullenix: "No matter what the Charr boast, we will reclaim Ascalon one day."
Captain Langmar: "I wouldn't let myself believe it before, but <name> has shown me that there are still heroes in the world, even after the horrors of the Searing. It may take time, but I have hope. Thank you, <name>."

Doff: "It's genius! All we have to do is adjust the difibricator and cause an overload in the rear activity gate drive!"
Lork: "What will that do?"
Doff: "Oh, probably nothing. But possibly everything! We could rule the world! Or it could blow us all to smithereens."
Mamp: "I could get a krewe together for that in three, maybe four hours."
Lork: "Look, <name> just finished saving all of us. Can't we wait to endanger the world again until after supper at least?"
Doff: "*sigh* Fine."

Gunnar Poundfist: "Bear has blessed <name>! I've rarely seen anyone... even a Norn... with such courage."
Olaf Olafson: "I taught <name> and companions everything they know. From how to hold a sword to what spells to use in combat. It's all because of me."
Egil Fireteller: "Stuff it between the horns, Olaf! My stories are amazing, but nothing compared to those of <name> !"
Olaf Olafson: "Alright, alright. Hail to <name>! The only human as brave as a Norn, and the only hunter as good as me!"

Devona: "We have cheated Grenth's grip once more and lived. And yet I wonder.... Perhaps it is time we hung up our blades; let someone else fight the monsters."
Mhenlo: "I know how you feel, Devona. But, so long as there is evil in the world, we cannot give up."
Cynn: "Baldie is right. As long as there are bad guys to set on fire, we have to carry the torch and, you know, burn them to cinders. Right?"
Mhenlo: "Er... yes. That's what I was trying to say."
Devona: "I guess so. And after <name>'s great victory, how can we do less? For Ascalon, and for glory!"
Eve: "Unless we all die trying.... But that's never stopped us before."