From GuildWiki
(Redirected from Err 7)
Jump to: navigation, search 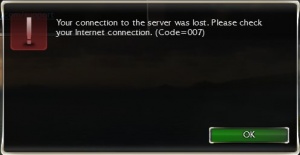 Error code 007, also known as a James Bond, is an error message that is displayed by the game at times. It comes after the player has been disconnected from the game.

According to Gaile Gray it describes a connectivity error somewhere between the Guild Wars server and the player's end, which usually would mean some kind of hiccup at the player's internet service provider. While often an error 7 is the result of an issue on the clients end, ArenaNet is sometimes responsible, as is apparent when a large percentage of online players receive an error 7 at the same time.

In the Dec 20, 2006 update, a reconnect option has been added to the game, allowing the player to reconnect after an error. However, the reconnect option does not always work; also, the person can die and fail in the mission while reconnecting.