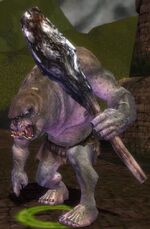 Ettins are a class of monster, i.e. a species in the bestiary of Guild Wars.

Ettins are giant-kin, large humanoid creatures, which have two conjoined faces on their single head. They have great muscular bodies and thick gray skin, and are always found carrying huge clubs on their shoulders.

Ettins can only be found as hammer warriors (except for their bosses, and the Earthborn Ettins which appeared on the Establish the Luxon Settlement quest). They will usually be found in groups of 2-3 and will generally pose a threat to any party spell caster if they all get to him/her at once. They can use their sheer strength to land great amounts of damage. Therefore, skills that hinder warriors (such as those that slow them or blind them) are very useful against Ettins.

Unlike full-fledged giants, Ettins can be knocked down (be mindful though that Enslaved Ettins, Snow Ettins, and Gypsie Ettins all use Balanced Stance).

Furthermore keep in mind that Ettins ...

Ettins may drop the following loot (besides gold and various weapons and items):

For an alphabetic list of all Ettins, including bosses, see also: category:Ettins