Fahranur, The First City is an explorable area in Istan. It is named for the ruins that make up most of it, which were once the capital of Elona. Today, it is overrun by undead and worse. To the south and east of the city itself stretch the Istani jungles.

The city was destroyed during the Scarab Plague. Prior to its destruction, it was the original home of the Sunspears, and apparently home to the Primeval Kings as Kamadan was considered only a village at the time. Librarian Gahmir Lenon in the Halls of Chokhin mentions that The First City has some connection to the kings of Orr.

There is a broken statue of Abaddon near the entrance to the Jokanur Diggings, which may be the one shown in the opening scene for Nightfall. 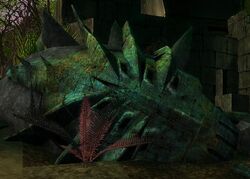 Inside the City proper