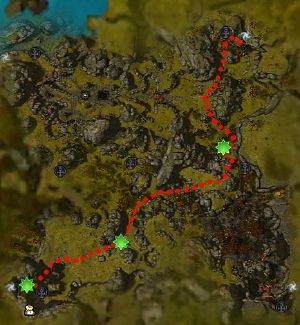 Assault On The Stronghold
Find the group outside Longeye's Ledge, approach them (aggro range) and let them finish their discussion.

"*The body of Brave Brent Poltroon lies before you, replete with savage and grisly wounds. It appears Brent's suspicions were not baseless after all, and he was chewed on by a Charr. What fate has befallen the other Ebon Vanguard?*"

Chance Redding: "Ah! Back, Charr! Oh, it's you two. It's a good thing you're here... I'm holding up, but Mr. Pointy was getting a little nervous."
Chance Redding: "I was about to roust every Charr in the place... as soon as I stop bleeding when I move. Anytime now."
Chance Redding: "Maybe I'm too injured to fight, but I can still offer inspiring homilies to pump us up for battle!"
Chance Redding: "Eh, let's just find the Sergeant before Blazeclaw turns him into short ribs."

"<name>, Jenn, Chance. I'm gratified you're not dead. Rake Blazeclaw and another Charr attacked me and headed into the dungeon. We are safe for now, but this isn't over yet. It may be worse than we thought. Those Charr said they were meeting another of their kind named Rragar. There is something insidious afoot, and whatever it is, can only bode ill for us if they aren't stopped."

The Hunting of the Charr

The corpse of Brave Brent Poltroon can be found just north of the entrance to Sacnoth Valley in Dalada Uplands. After taking the quest, simply follow the quest marker to the locations of the other two persons listed. Sergeant Weststar will give you your reward and the next quest.