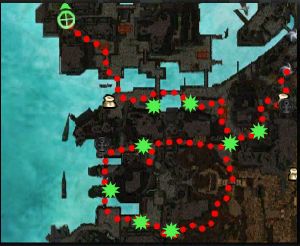 I heard about what happened on Mount Qinkai... It's despicable that the Jade Brotherhood would use your friends to get at you like that, but it's not particularly unusual for them. Unfortunately for me, not everyone is as levelheaded as you are. One of my subordinates, Imperial Guard Natsumi, is a relative of one of the students you rescued and has decided to take it upon herself to go and seek revenge on the ones responsible. She doesn't seem to understand that attacking the Brotherhood again like this will just cause more acts of retaliation.
Natsumi's partner has volunteered to track her down. If you're up to it, I'd like to ask you to head to Wajjun Bazaar, and check on Miyuki's investigation.

Accept: We've got to stop this before it spirals out of control.
Reject: But I love revenge!
When asked about quest: '

Miyuki: Captain Lei sent you to help? I appreciate it. I can't say I've made much progress so far.
Miyuki: Natsumi is looking for a Jade Brotherhood member known as Meijun, Vengeful Eye. He got that name due to his penchant for revenge attacks whenever the Am Fah attacked him or one of his friends. And, as you already know, he is not afraid to apply his techniques to others outside the Am Fah.
Miyuki: We need to track her down before she rattles the hornet's nest for a second time. Let's ask around the bazaar and see if anyone has seen either Natsumi or Meijun. The folks around here are usually pretty cooperative, but we may have to rough up some Jade Brotherhood if we want to get answers from them.
<party leader>: Fortunately for you, fighting Jade Brotherhood is one of my many talents.

Miyuki: Natsumi can be a handful at times, but this is the first time that she's directly gone against the captain like this. She's always been very protective of Kisai and Jun, though.
<party leader>: I can understand her anger; after all, it seems like this is partly my fault. But Lei is right that we need to stop her before this gets worse.
Miyuki: I agree, let's find her as quickly as possible.

<party leader>: Can you tell me anything else about Meijun? I've only met him once before.
Miyuki: Then you probably know enough. He has an unhealthy obsession with the idea of revenge. To him, there's no slight small enough to avoid his wrath.
Miyuki: Since the Ministry assault against their leaders, his acts of revenge have gotten even more violent. I shouldn't have to say this, but not everyone has been as lucky as Kisai and her friends.
<party leader>: In that case, I'll make sure this is the last time.

Miyuki: Alright, I think we've got enough information. Let me see your map. Based on their testimony, I think we should head here next.

<party leader>: How did you end up being partnered with someone like Natsumi?
Miyuki: That was Captain Lei's decision actually; I'm not sure what he was thinking when he assigned us. Perhaps he wanted me to look after Natsumi's short temper, or perhaps he wanted me to learn from her exemplary fighting skills.
Miyuki: It's funny actually. I actually almost arrested Natsumi on her first day of work. She had knocked over a fruit stand in her rush to pick up her armor from the smith, and I was on duty nearby. I made her help clean it up before I let her go, and she was late to report in as a result.
Miyuki: Captain Lei was pretty angry. But Natsumi and I have become good friends and partners since then.

Natsumi: Meijun! I'm here to bring you to justice!
Miyuki: Natsumi, wait!
Meijun, Vengeful Eye: Who do you people think you are? Ah wait, I know you, you're the sister of that student I captured. She was crying about something like that when I left her in that cave to die. I see you've gotten this so-called hero to track me down.
Natsumi: Why you...
Meijun, Vengeful Eye: Vengeance is an irresistible fruit, is it not? You may kill me here, but just remember that your actions make you no better than us!
<party leader>: No, it is different. We are here on behalf of those who cannot fight for themselves; the Jade Brotherhood only acts in its own self-interest and greed.
Meijun, Vengeful Eye: Dress it up with words however you want, but I can see the anger in your eyes as well. You still seek vengeance, so come! See if you can take it!

Meijun, Vengeful Eye: Arrgh! Do it! Kill me! But remember, my death will only continue the cycle of vengeance!
Natsumi: I've been waiting a long time for this.
Miyuki: Natsumi!
Natsumi: ...
Natsumi: No, you're right, Miyuki. This stops here.
Natsumi: Meijun, Vengeful Eye, by the authority of the Dragon Empire, I hereby place you under arrest for kidnapping, attempted murder, and twenty-three counts of other criminal activity.
Meijun, Vengeful Eye: This isn't over, hero. You can't stop what you started when you attacked us.
<party leader>: No, but I can stop you.
Miyuki: Thanks for helping me, <party leader>. Natsumi and I will take this guy to the prisons before apologizing to Captain Lei.
Natsumi: Oh, that reminds me! I got this note from one of the Jade Brotherhood I was "questioning" on the way here. Could you take it to him? It seemed pretty important.

Thank you for your help. Natsumi has a tendency to overreact to things, but in this case I can't really blame her. To have her sister attacked and left for dead as a means of example to another... Well, I'm just glad we were able to stop her in time. Having Meijun off the streets should hopefully slow down the Brotherhood as well. Now let's see this document she managed to recover.
Hmm, this is disturbing. It seems to be some kind of draft of a treaty agreement. The other party is blank, however, so I'm not sure who it is. It seems the actions of the Ministry of Purity have driven even the Brotherhood to seek allies elsewhere. I'll start an investigation into this, so don't worry. In the meantime, please take this as compensation for your assistance.

Enter Wajjun Bazaar from The Marketplace, heading south and west to find Miyuki. After defeating her opponent and speaking with her, travel around the Bazaar speaking with Peasants or Jade Brotherhood that appear green initially (they will turn hostile when you approach, then friendly once defeated). Your progress bar will fill as you gather information. Once complete head to the northern island to battle Meijun and finish the quest.