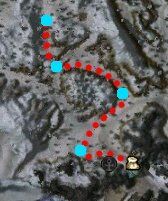 Talus Chute
You can find a short run just outside the west exit of Droknar's Forge. The map at right shows the fastest path to several groups, marked in blue. After finishing off the last large group, simply resign and restart the run. This run can be soloed using a 600/smite build, a 55 monk build, or a Shadow Form sliver build. If you are going as one of the monk builds you should bring something to prevent interruption. The Avicara Braves have Savage Slash. The Avicara Wise are mesmers, but mostly geared for anti-melee with no interrupting skills. The Avicara Guile have the skill Strip Enchantment which can be a problem for enchantment based farming. If you go with a Shadow Form build you will need some type of healing because the Avicara Fierce have the ability Ignite Arrows. This will cause damage to you even through Shadow Form.The map given is for one group of spawns, they will spawn in a few different areas. This one is the easiest and you can zone until it is the one you want. The others are usually a bit longer, but offer more Avicara to farm. With just a balanced party of 5 players this area can be easily taken. This is faster than solo runs, and over time yields about the same amount to all party members as a solo farm would.

Mineral Springs
A longer run takes you past Nick's current location. If you follow a clockwise loop through the area, beginning by going left after exiting Tasca's Demise, you will encounter perhaps a dozen flocks of 6-8 Avicara plus the half-dozen bosses. Rezone repeatedly until you have sated your lust for scalps. Consider bringing some Signets of Capture as many of the elites are unique to the springs. If you are well prepared for the Tengu, you should have little trouble with the 3 other groups encountered in the loop: 3-4 triplets of Tundra Giants; 2 pairs of Ice Imp/Siege Ice Golem/Pinesoul; and another set or two of the Pinesoul.