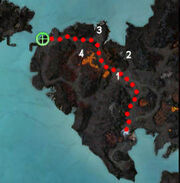 "Since Confessor Dorian's death, the White Mantle is like a snake without its head. It still writhes and strangles the peoples of Tyria, but it has no eyes with which to see, no teeth with which to bite. Unfortunately, they still have their so-called 'Unseen' masters to assist them."

This quest is rather short, but can be very difficult if approached the wrong way. This starts right after leaving Ember Light Camp into Perdition Rock. There you will find yourself in an area that is heavily patrolled by Mahgo Hydras and Flesh Golems. If you try to fight your way through here, you're in for a very long and tough battle and you are very likely to get overwhelmed by the seemingly never-ending stream of enemy reinforcements. It can be done, of course, with a somewhat coordinated party. It is much easier, though, to avoid fighting here altogether. There is a gap in the patrolling groups that can be used to slip past them. Right after exiting Ember Light Camp, gather at the Resurrection Shrine and prepare to move out. From the north one or two groups will approach, which will move past you to the east. As soon as the way is clear, follow the path uphill to the north and then downhill to the northwest. Move swiftly and do not stop. You may find one single Mahgo Hydra, Flesh Golem or Phantom here. Dispatch it quickly and move on without tarrying.

Now you will have a Mursaat Tower with an Ether Seal blocking your way ("1" on the map). To the north and south of this Ether Seal you will find a group of three Jade Bows each and further to the north, in a small valley, will be a group of Mahgo Hydras and Igneous Ettins with the possibility of a boss spawn ("2" on the map). Here it is important to quickly dispatch the Ether Seal and move the whole party down the slope into the even area, else you may be ambushed from behind by the patrols you have previously avoided. Take care not to aggro the Jade Bows while fighting the seal, especially not those to the north, as they are dangerously close to the boss behind. Once you have destroyed the seal, move on to the northwest, through a small group of White Mantle, which shouldn't pose any threat at all.

You will now approach the northern shore of the island ("3" on the map). Here you will find another small group of White Mantle, and a group of Drakes, again with the possibility of a boss. Try to fight the Mantle without aggroing the Drakes. Mostly, fighting the drakes isn't necessary at all.

Follow the path to the west. You will encounter pairs of patrolling Breeze Keepers here. Take it slowly, let them come to you and kill them one by one. South of your path is another group of Mahgo Hydras, Igneous Ettins and a possible boss ("4" on the map) that you shouldn't aggro unnecessarily.

Now you will approach a small tower-like building surrounded by several groups of White Mantle. On top of this building you will find your three targets, one Warrior boss and two Mesmer bosses. They are not hard to kill, especially if you make sure to take care of all the supporting Mantle units before engaging them.

After the bosses are dead, speak to Captain Grumby, who will be waiting right next to the building. He will take you to Ring of Fire. Every party member who wants to be transported there must speak to him separately.