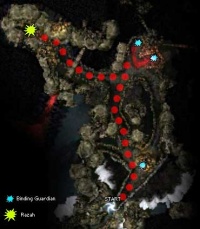 Chaplain Phyratyss in Gate of Anguish

"With the defeat of Abaddon, new areas of the Realm of Torment are being explored every day. I recently heard news of a passage leading out of Abaddon's Gate to an area called the "Heart of Abaddon." I'm curious to discover what secrets might lie within. I would visit myself, but I cannot leave my post. Would you investigate this area for me? It is certain to hold knowledge the likes of which no one has ever seen. What do you say?"

Accept: "With the knowledge I bring back, you'll be the envy of your clergy!"
Reject: "Sloth is a deadly sin, chaplain. I suggest you investigate yourself."
When asked about quest: "Go to Abaddon's Gate and find a way into the Heart of Abaddon. Tell me what you find inside. My curiosity is piqued!"

"This area is off limits...but your reputation precedes you, hero. If you have defeated a god, who am I to tell you where you may or may not go?"

Player response: "I wish to enter the Heart of Abaddon."

"The Heart of Abaddon is unexplored and potentially dangerous. Are you prepared to risk life and limb?"

Accept: "I am aware of the dangers and prepared to meet them."
Reject: "I've changed my mind."

"I have been alone for what seems like ages. I am Razah, created from The Mists. I have no memories of my creation, though, the past is shrouded in fog. Abaddon bound me to this plane. His minions blessed me with knowledge to fulfill a great purpose. However, I can sense Abaddon is no more. Now, I am without purpose, my existence without meaning. So tell me... are you here to give me my purpose?"

Player response: "We must find our own purpose in life, Razah."

"Search for my own purpose? An interesting concept. To not be told what to do; to merely... exist to find a purpose. I find you curious, unlike anything I have ever encountered. I wish to journey with you to learn more about your ways. Perhaps my purpose is to travel through the world with you."

"Allies? I do not understand your words. I have much to learn. However, you must remove the barriers that bind me if I am to accompany you. I am restrained by guardians summoned by Abaddon. As long as they exist, I must remain here. Destroy these guardians and Razah will be your "allies.""

"The barriers are no more. I offer you my skills and my insight. As a child of the Mists, I have an affinity for things spiritual. In return, you will show me how you experience life and aid me in finding the purpose for which I was created. I must take this time to reflect. I will meet you later."

"A being created from the Mists? I would have never thought that possible. I knew the Heart of Abaddon would hold secrets, but this is far more than I could have hoped! I would like to meet this Razah. Bring him... or it, rather... around when you get the chance."

Note: Although this quest is given in the Gate of Anguish, the quest itself takes place in the Realm of Torment accessed from Abaddon's Gate. This means that you will not be facing Domain of Anguish level monsters and you can include Henchmen in your party. It is possible to complete this quest with just heroes and henchmen.

Speak to Shafoss to gain passage to the Heart of Abaddon.

When you walk in, the quest marker will point out the location of Razah. Also, you will be faced with some rather large groups of Torment Demons. It is advised that you move back towards the entrance to the area and wait for the patrol which walks up to you and fight them there, this will prevent aggroing further demons which will make the battle much more difficult. Fight your way through the Torment Demon groups until you find him. He will be standing in a glowing area (similar to a ward) that represents his bonds. After you speak to him, you will have to destroy the three Binding Guardians (one of which you will have passed earlier but was not hostile).

Go to the nearest two, and be careful as each Guardian is guarded by a horde of monsters that will only appear once you aggro the Guardian. The one to the northwest is guarded by a group of Margonites, the one next to it is guarded by Shadow Army troops and the one at the beginning is guarded by four Titan Abominations.

After destroying the three Guardians, speak to Razah and he will instruct you to speak to Chaplain Phyratyss at the Gate of Anguish. Once you speak to Chaplian Phyratyss, you will have completed the quest.