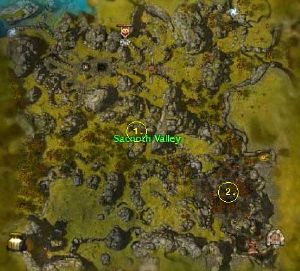 Gwen in the Hall of Monuments

"[Difficulty: Master] This is a memento of the past, a ghost of what I once was. You never cease to amaze me, <name>. No matter how hard the Charr try to destroy what we have, there will always be something that survives.

According to the Ebon Vanguard's scouts, forces within the Charr Shaman caste have begun to move in Sacnoth Valley, trying to regroup. The rumors speak of magic once thought lost and great wrath wrought upon us. I don't want to believe that they could use the horrific power they wielded in the Searing once more... but if there's even the least bit of truth in this, we must stop them. I will not see another know the pain of my loss."

Accept: "History will not repeat itself."
Reject: "I've got my own problems, kid."

Flame Keeper: ”Do you believe what the Shamans say is true?”

Flame Keeper: ”I know that Pyre has cast a shadow upon them. They claim that the herald of our victory will ignite the sky with a fire as fierce as our souls. It won’t be long now.”

Gwen: ”If what those beasts said was true... we must hurry!”

Straut Flamebourne: ”For those that doubt the power we hold, burn this image into your heart as our fires raze those that would stand against us.”

Straut Flamebourne: ”There are only two types of creatures in this world: the Charr, and their prey. Let us show those humans where they stand!”

Gwen: ”The only thing you will show us is the fear in your eyes as I strike you down. I will not allow such destruction to be brought upon my home, my people... not again!”

Straut Flamebourne: ”Foolish little mice... such a pity that you must die before knowing the despair of seeing your people destroyed.”

Gwen: ”Despair? Let me teach you about despair...”

Gwen: ”If those Shaman were attempting to make a show of their power, then all that they have proven is how powerless they are."

Gwen: ”How I long for the day when I no longer stand in the shadow of these beasts.”

Gwen: ”I also fight for that day. Every step in this world is one that takes us closer to that future. I hope we can see it together, friend.”

”The Charr were attempting to recreate the ritual of the Searing? Had anyone else told me, I would have not believed such a thing possible. It is well that they did not succeed, and we can hope that their vile magic died with them. If it is true that the Charr needed the Titan that once dwelt in Sacnoth Valley for their ritual, the Ebon Vanguard will see that Charr never set foot here again. You have done a great deed for us all, <name>.”

Enter the Burning Forest from the west or the south (to shorten the route). Take out the patrols first and the two larger groups of Charr next; these should be fairly easy as they are passive until you come close to the quest marker. The third group looks easier, as it seems to contain a lone boss named Straut Flamebourne. However, attacking him spawns a group of Charr Effigy, making things more interesting, as they spam Breath of Fire.

To counter Straut & company, bring interrupts, defenses against fire damage, condition removals, and/or plenty of healing power. You can safely manage the quest with just Heroes and Henchmen. Another tactic is to mount Siege Devourers in Grothmar Wardowns or Dalada Uplands; you can bring one from each if you have at least two players in your group.