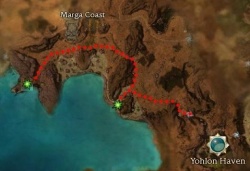 "I know where Kormir is and will help you get her out...for a price, that is. I also need something in Gandara, so here is my proposition: you will help me find a map of Gandara so we can both get what we want, and we'll let the Master of Whispers deal with the Drought himself. If we have a deal, we should go find Unlucky Simon, otherwise, go meet with that snake, Whispers."

Accept: "Kormir would do this for us."
Reject: "I'm not interested in working with someone only out for herself."
When asked about quest: "Unlucky Simon said he would meet me by the Marga Coast after he stole the map. I'll be waiting there for you."

"Took you long enough. Let's find Unlucky Simon. He'd better have that map I need or he's a dead man."

"Lem said he had a waterproof container for the map. But as soon as I handed it to him, he punched me in the face and ran off with some of the other crew. My guess is he plans to sell it to the highest bidder. He can't have gotten far. Maybe you can still catch up to him."

Margrid the Sly: "Lem! If it wasn't for your sense of humor, I'd kill you!"
Shifty Lem: "Come on boys, we are in a tight spot!"

...Well, ok. It's pretty much exactly what you think. Here, take the map."

"Finally, I have the map of Gandara! It won't be long 'til the diadem is mine. We must get this map interpreted as soon as possible, and I know just the guy for the job. I'm impressed with what I saw here. Maybe you actually do have a chance at rescuing Kormir."

Meet with Margrid in Marga Coast. She will be just outside of Yohlon Haven. Next, follow the quest marker to the location of Unlucky Simon. He will inform Margrid that the map has been taken by Shifty Lem. Follow the quest marker northwest to find Shifty Lem. After a short conversation, Lem and his party will turn hostile. Defeat them all and Lem will turn friendly again, allowing you to complete the quest.