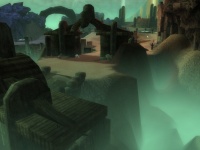 Overhead view of the Forgotten Shrines

This map Consists of five Capture Points in the shape of an 'A' throughout the map. Two opposing teams begin at the base of the 'A' and move upward to the top most point. Players and the Ghostly Hero will resurrect at the two shrines closest to the spawn points.

Every 30 seconds you gain one point for each capture point you are holding.

At the beginning of the match, the caller will usually tell the team (usually by number) which shrines they are going to. This splitting of the team tends to last the whole match. When each teammate sticks to their original split group, the entire team moves efficiently.

A common strategy on this map is for one player (usually the Protection Monk) to take the Ghostly Hero and capture shrines as the "Ghost team". Depending on the team, the other monk (the Infuser) will join them. Because the Ghost counts as four players when capping, he is very valuable. Whether the ghost team is sent up to the top shrine or stays at the bottom shrines varies.

Because of the layout of the map, at the opening of a match, the top shrine is usually the first point of contention (each teams usually begins by capping their own side).

Snaring the enemy team's Ghost and killing, especially time killing him, is a valuable tactic because it will greatly weaken the capping power of the opposing team.