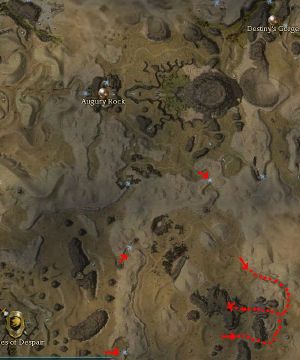 Prophecies Character
The Forgotten Ones

"If you seek more wisdom to help you along the path to Ascension, seek out my broodmate Siliss Yassith in the Arid Sea. He can grant you special insight that will allow you to take better advantage of your own skills.

Will you seek out this Forgotten knowledge?"

"I sense that you have come to me seeking Forgotten wisdom. Know then that we Forgotten were the first race to rule Tyria. During our reign, the world was at peace until your people came, until the humans came. We could not compete with the savage humans and were slowly driven into this desert where we met our future master, the great crystal dragon Glint. It is she who you must seek if you wish to Ascend. I sense a deep goodness within you and it would please me if you were to succeed in your quest. Allow me to unlock some of your inner potential."

You can reach The Arid Sea from a few points shown in the map. You can walk from quest giver, or start from Destiny's Gorge, Augury Rock or Dunes of Despair. Once in the Arid Sea, do not head directly for the star on your map. The star is on a rock island, which can only be approached from the east. Siliss Yassith hides on top of a rocky island with no direct way up. As you approach the area from a distance you can see a giant statue east of the star rock island. As you continue to approach, the giant statue will collapse creating a bridge to the island. Go to the east side the statue's platform. Then head due west up onto the platform. (Click on Yannel Brunn to get to statue base if you like.) The statue appears to be a female warrior. The torso of the statue ruin now forms the bridge to the top of the hill. Continue west, cross this bridge then turn right to climb the hill. If you go left (after crossing the bridge), you will find at least one Sand Wurm.