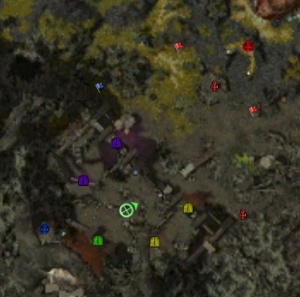 Fort Aspenwood is a Competitive Mission where a randomly chosen team of 8 Kurzicks must defend Master Architect Gunther from the attacking team of 8 Luxons until he is able to complete a super weapon, Gods' Vengeance.

Fort Aspenwood is a base defense/base attack mission, where the Kurzick must defend Master Architect Gunther from the Luxons so he can complete the super weapon, Vengeance of the Gods. The Architect's progress to completing the weapon is tracked as a percentage complete, slowly incrementing over time (approximately 1% per 8 seconds). If this reaches 100% the Kurzick team is victorious. If the Architect is killed before, the Luxon team wins.

Each side is a team of eight players randomly assembled from those waiting in the Fort Aspenwood (Kurzick) and Fort Aspenwood (Luxon) staging areas. Players are resurrected with a 2-3 second lag time and receive no death penalty.

The Fort Aspenwood map is based in Fort Aspenwood and land in front of it. The fort features three layers of defensive walls with doors made of Amber. The first and second walls have two doors, the inner-most layer has only one door. There are five teleporters on the map. Two are used by the Luxons to exit their base, two are used by the Kurzick to exit the fort from behind the second wall, one is used by the Kurzick to travel from the innermost keep to behind the second wall. The Kurzick players spawn in the fort itself, the Luxons on a hill opposite the fort.

The map is divided into Orange and Purple sides. Each side features an inner and outer gate guarded by several Kurzick NPCs; two elementalists on the outer gate, two necromancers and an elementalist on the inner gates. Each side has a Kurzick gatekeeper in the innermost part of the fort who can repair the gates of the side they represent. There are also assorted other defensive Kurzick NPCs throughout the fort. Each Luxon side has a Siege Turtle Commander, a Siege Turtle and four Luxon Warriors that accompany the turtle, attacking players that come close to the turtle. There is also an Amber mine for each side. The innermost gate and the center mine furthest from the fort are Green. The green gate is guarded by Kurzick NPCs; a Juggernaut, two mesmers and an elementalist. The Kurzick gatekeepers and Master Architect Gunther stand behind the green door in the innermost keep. All of the mines are initially held by Luxon NPCs, but may be taken by the Kurzicks during play.

In play the Luxons talk to the commanders to start the siege turtles moving towards to the Kurzick base so they can destroy the gates and get to the Architect. The Kurzicks must claim the amber mines and run amber to the gatekeepers to repair the gates as they are destroyed and defend the fort. The purple and orange amber mines produce Raw Amber Chunks, which allow a gatekeeper to repair a destroyed gate on their side, resurrecting all NPC guardians for the gate. The Raw Amber Chunks can also be brought to the master architect, adding 2% to the progress track. The green amber mine produces Refined Amber Chunks. If brought to one of the gatekeepers, they will repair the green gate if it is destroyed, resurrecting its guard NPCs. If the green gate is intact, the gatekeeper will repair the innermost destroyed gate on his side. If given to the architect, the Refined Amber Chunks adds 4% to the progress track.

While the teams are randomly assembled, there are several things you can do to prepare for this mission:

Primary objective is to help Master Architect Gunther to complete the God's Vengeance.

Secondary to this but key to ensuring the primary objective is fulfilled the following roles should be pursued:

There are 3 primary roles to a successful assault.

An elementalist is the best and fastest way to kill NPCs using their powerful AOE attacks. A good build should be able to kill all NPCs at a gate or a resource location in less than 30secs, a dedicated build for only that purpose even in as few as 5-10 seconds.

An enemy monk often hides behind closed gates while he bonds and heals one NPC in front of the gate. You must be able to remove multiple enchantments at once if you want to eliminate that NPC. Since the monk is behind a gate, ranger disrupts and direct attack will not work. Energy denial and general casters can help keep the monk busy with himself.

In this role, your job is to heal the siege turtle and keep it alive. Since the turtle has high damage reduction, you will mostly be encountering degen in the form of hexes and conditions. Plan accordingly. Heal priority should be: