Bjora Marches
In the southwest corner by the portal to Norrhart Domains. Kill the patrolling 3 - 5 groups of Mandragor, beware of aggros even in Normal Mode can be hard. With 4 man team averaged 1-2 husks per trip (3-5 husks Solo if wait 2 minutes). Rezone and repeat.

Jaga Moraine
During Curse of the Nornbear, 2 groups appear near the starting point. Solo with spirits works VERY well, about 1 Husk per 2 trips. 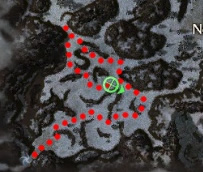