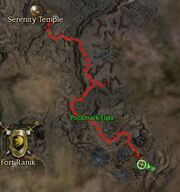 "I was appalled when I heard what happened. It is unconscionable that two of my men would try to steal from the Temple, but when I went to confront Footman Tate and Footman Quinn with these allegations, I discovered they had fled."

"I do not think they can have gone far. Shiftless and gutless as they both are, they must be within the Eastern Frontier or perhaps as far south as Pockmark Flats. And yet, now, more than ever, all my men must stay focused on defending the Wall. Will you find these two and bring them to justice?"

Footman Tate can be found in the ruins southeast of Frontier Gate. When you talk to him he'll agree to surrender if you tell him everything will be OK. You then have to lead him back to Frontier Gate. Note that he will attack any enemies along the way, and can die easily. It's best to clear the path, and the mesa above the path, before taking him to Frontier Gate, which is easiest if you leave from that outpost to do the quest.

Footman Quinn is located in Pockmark Flats directly East of Fort Ranik. He's not interested in coming back with you though. He's a level 5 Warrior and is pretty easy to kill. Dispatch him and return to Warmaster Riga in Frontier Gate for your reward.

Since this quest gives lots of experience its a good target for new runners to start perfecting their craft.

After getting Tate to join you, the quest will reset if you leave the area to the Pockmark Flats instead of heading back to Frontier Gate.