Nicholas the Traveler is located close to both Ice Tooth Cave and Frost Gate. The path from the cave is much easier, as you don't have to confront a horde of foes after exiting. However, none of the enemies are high level, so only low level parties will notice. 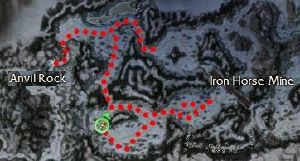 The Iron Horse Mine farm