The Garden of Seborhin represents the pinnacle of Vabbian horticulture. It is closed to the general public, but for those with the right contacts, access can be gained from Forum Highlands, close to Tihark Orchard. The garden regularly hosts festivities such as the Festival of Lyss, when the elite of Vabbian society get together and have a nice time. 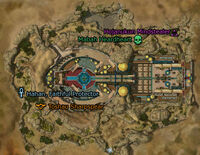