The Ebony Citadel of Mallyx (mission)

From GuildWiki
(Redirected from Gate of Anguish (mission))
Jump to: navigation, search

For information on the citadel itself, see The Ebony Citadel of Mallyx (building). 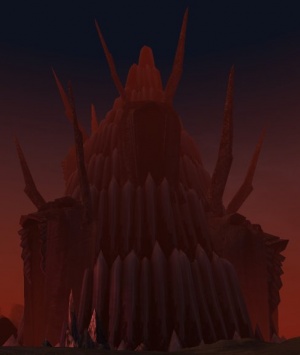 The Ebony Citadel of Mallyx from the outside 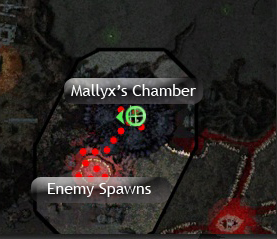 The Ebony Citadel of Mallyx is the final part of the Elite Mission of the Nightfall campaign.

The mission forms the final fight in the quest "Mallyx the Unyielding." Having finished steps from 1 to 6 of that quest, you will be able to do this mission.

After finishing the mission, Primeval Armor Remnants will appear in party members' inventories. In addition, an unlocked Citadel Chest spawns, holding one of Mallyx's unique items for each party member.

Furthermore, finishing the mission allows players to complete the Mallyx the Unyielding quest, and claim the reward for that as well.

The mission is repeatable, but only in combination with the quest "Mallyx the Unyielding." Having finished the mission switches the status of the quest to "completed", and Zhellix will not perform the opening ritual any more, so the mission becomes inaccessible. In order to gain access to the mission again, players must claim the quest reward and do the quest again.

The first step of the mission is to protect the High Priest Zhellix while he performs the opening ritual. Eighteen (18) waves of the following monsters either spawn or arrive at the area where the priest is:

Pay close attention to when the waves spawn as some groups will spawn on the death of the Titans that came with the wave and not on the death of the Titans that spawn after these are slain. For example: if a wave is formed by 4 Rage Titans, as soon as the last Rage Titan of this wave is eliminated, the next wave will spawn no matter how many Dementia Titans are still alive.

The waves come in the following order:

After the all these waves are eliminated, the door to the Citadel of Mallyx opens and the priest will be removed as an ally from the party list. As soon as any party members steps past the door, a short scene is played and then the party is transferred in whole inside the Citadel with the door closed behind them.

Mallyx the Unyielding will be standing on a pedestal and will be non-hostile, as will be the four spirits behind him. As soon as any party member gets close enough to Mallyx (about 1.5 times the aggro radius), Mallyx will give a short speech and then, he will turn hostile and attack.

Four "Soul" spirits reside behind Mallyx which are responsible for the 4 environmental effects in the room, known from the four sections of the Gate of Anguish explorable area:

Killing each spirit removes the respective environmental effect. When taking out the spirits the following tactics are useful:

Mallyx himself uses a few particularly nasty monster skills, spoiling the "classic" party setup with tanks in the frontline and ranged attackers, spellcasters and healers in the backline:

Because of these two skills, the party should try and use bonuses that cannot be removed or exploited, such as Spirit effects, Weapon Spells, Wards, Wells, Shouts, etc., or plain skills.