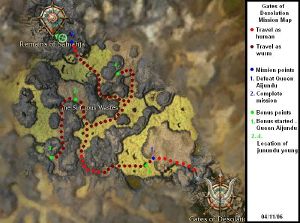 Zhed Shadowhoof must be in your party to enter this mission.

Tame Queen Aijundu and gain control of the junundu wurms.

The first part of this mission involves fighting progressive waves of undead, along with intermittent fights against Queen Aijundu. Palawa Joko will lead you to a hill overlooking a Wurm Spoor, beyond which the sulfurous wastes begin. Walking into the sulfurous wastes will kill you within a couple seconds due to the Sulfurous Haze effect. If you are in a party with heroes/henchmen, it is a good idea to plant a flag at the top of the hill to keep them from running off and dying in this haze. After a few waves of undead, Aijundu will attack; after she drops to about half health, she will retreat, and more undead will attack. Eventually Aijundu will attack a second time, and when you fight her off this time, she will allow you the use of her fellow wurms to cross the wastes.

Awakened Acolytes and Awakened Cavaliers can resurrect the other undead — be sure to take them out first; bring Frozen Soil; or interrupt their rez skills (Renew Life and Signet of Return, respectively). Chakeh the Lonely also has signet of return, but it's easier to take out his Monk first before killing him.

Nearly all mobs in this initial siege are undead, making them highly vulnerable to holy damage. Giving monks a couple of smiting skills or letting martial weapon users take a dervish secondary for Heart of Holy Flame will cut through the mobs very quickly.

At the end of the queen-taming portion of the mission, Queen Aijundu, Amind the Bitter, and Nehmak the Unpleasant all attack simultaneously. It can be useful to defeat Aijundu first, both because she dies the fastest, and because she has the highest damage output.

An alternative approach to taming the Queen is to flag your party far away to the east so that your party will not aggro the approaching Awakened. As you follow Palawa Joko, he will pause east of the Wurm Spoor, then he will run to the west. Flag your party at the first location that Palawa Joko stopped. With your party in this safe location, pull the Awakened to you in small groups.

Clicking on the Wurm Spoor will summon a pack of wurms, which will swallow you and your party. You now control the wurm, with a special set of wurm-only skills, and can cross the sulfurous wastes without dying. Palawa Joko will lead the way to the Remains of Sahlahja. You will have to fight through several groups of Margonites and Elementals; at one point you will be forced to leave the wurm and cross a patch of rocky terrain on foot, then summon the wurms again. The Margonites should be no problem with your high-damage wurm skills, but be careful of the Elementals — your wurms are weak against their attacks. Although the wurms have a very weak healing ability, Junundu Wail should ensure that your party never gets wiped.

The bonus is not difficult. It is obtained by speaking to Queen Aijundu once she is tamed (although you don't have to - the bonus objective will also appear after saving the first Junundu Young). There are 3 Junundu Young scattered throughout the mission, each guarded by a pack of Margonites. The demons will not attack them so there is no need to rush; you must simply travel to their location and clear out any enemies guarding them. The enemies are not difficult to kill, especially as a wurm.

The biggest danger to the young is actually you -- Junundu Smash will damage them, and they have low hit points. It can be safer to pull the Margonites away from the Junundu Young before fighting them. Once the "saved" message appears, if that Junundu Young dies, it no longer matters (as may happen since they will follow you after you rescue them).

Trying to fight off mobs as they come is still quite manageable, especially if you have a couple characters dealing predominantly holy damage. Things can seem a little overwhelming when eight mobs attack at once following Queen Aijundu's first retreat, but you'll quickly thin them out to have a more manageable situation.

Palawa Joko: Before you can master the Desolation, you must first master the beast. Those not up to the task die a painful, horrible death. The great wurm Aijundu waits for you, mortal. Tame the queen or perish in her belly!

Palawa Joko: My tenuous grasp on these desolate sands is weakening. I can show you where to go, but the task of taming the wurm is yours alone.

Zhed Shadowhoof: Be careful. I don't trust that shambling, undead two-legged lord any farther than I could kick him.

<party leader>: Don't worry, Zhed. We've got your back.

Zhed Shadowhoof: No, human. I will have your back. You lead, I shall follow.

Palawa Joko: Venture close to the wurm spoor and you will awaken Aijundu. But be sure you are prepared to challenge the queen of the wurms. Once you have awoken her, she will not rest until she is tamed...or you are kicking and screaming inside her gullet.

Palawa Joko: You have competed her first challenge, but Aijundu will not yield so easily.

Palawa Joko: Aijundu will hold back no longer. The more you disturb her, the fiercer she becomes.

Palawa Joko: Impressive, mortal. Truth be told, few survive the first challenge and none, save myself, survive the second...until now.

Palawa Joko: You are a tamer of the sands. Aijundu has deemed you worthy of riding her kin. Do not abuse this gift, lest you find yourself wurm fodder.

Palawa Joko: Interact with the wurm spoor to become one with the junundu. Your bodies and minds will merge, and traversing these sulfurous sands will be instinctual.

Palawa Joko: Follow me mortal. I will guide you through the sands of desolation. But beware! The armies of Abaddon infest the area.

Palawa Joko: Well, well, you seem to be more capable than I thought.

Zhed Shadowhoof: Given your low expectations, that would not be hard.

Palawa Joko: Easy now, my little plough horse. Now if you don't mind, I will be taking my leave.

Zhed Shadowhoof: This abomination preyed on my people centuries ago. Let us return him to his tomb.

Palawa Joko: It took the armies of the Ossa clan to defeat me before. You think your motley band are their equal?

<player name>: He gave us what we wanted. We will let him go on his way.

Palawa Joko: And that is why humans rule and your people are beasts of burden. They think things through.

Zhed Shadowhoof: We've not seen the last of him. He'll be back, and we'll regret having helped him.